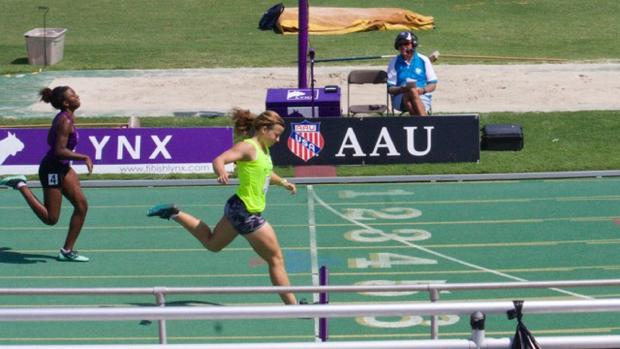 1) Moving from the Texas outdoor season where the chance to compete in multis is very limited, how have you liked the summer season compared to your usual outdoor racing schedule?

I like the summer season a lot because my meets are not every single week, so I get time in-between to improve or correct what I needed to from my previous meet. Since the meets are longer it gives me the opportunity to compete in the Heptathlon as well as my individual events which is so much different than the school season.

2) How have you adjusted your training and daily routine this summer to be able to focus on seven events?

This summer I have been training every Monday through Thursday for about 2 1/2 hours each day. We normally alternate doing a hard running workout and throws one day to hurdles and jumps the next day. On the weekends I normally have a competition but when I didn’t I would get easy runs in to let my body recover from the week. Since I didn’t have school to worry about it was a lot easier to put all my focus every day into my training.

3) You've had a busy summer, traveling all around the state to compete in the heptathlon, how excited were you to travel to Virginia for the AAU Junior Olympics?

I was really excited to travel to Virginia. Going to Abilene and around Texas is great but I always love going out of state for competition and being able to compete against girls from all over the US. It wasn’t quite as hot as Texas and on my off days I was able to go to the beach and relax a little so that was definitely a bonus.

4) Coming off a solid performance at USATF Region 12, what adjustments did you make to prepare for JOs?

I had to adjust my high jump mark and really work on executing my races and events. Some of my weaker events, like shot put, I just tried to get in as much work as I could so that, hopefully, I could throw some pr’s and bump my score up.

5) Starting into the heptathlon at JOs you had a very stolid Day 1. Coming away with marks better than USATF Region 12, and putting together one of the best Hep Day 1s you've had all summer. How were you feeling through those events, and what do you attribute that success to?

Day one was actually pretty crazy. I knew that I had to start of strong on the 100 hurdles because that’s what really sets up the day and can get you a lot of points right from the start. It was not my best race but still good enough to get me on the right track. After that we went out of order and threw shot put which threw me off a little bit. Shot put is not yet one of my strongest events and I did not get the score I was hoping for, but it fired me up because I knew I needed to bring it on the High jump and 200m to get back to where I wanted to be. We had a 3 hour break between shot put and high jump because the pits were completely backed up so during that time I had to keep my mind and body in competition mode which was hard to do when we all wanted to just finish the day. High Jump was okay but I was frustrated I didn’t jump 5’0 because one of my goals this summer has been to jump 5’0 consistently. The 200m I got out really strong on the curve and just tried to hold it the last 50m.

6) One of your stronger events has been the javelin, but you didn't quite get the points from that event that you've seen in the past few weeks. How did you mentally recover after the javelin to be fully focused for the 800m?

I had to do a total refocus after the Javelin because I have been throwing so well this summer and just could not put it together that day. I knew that the 800m was my last shot to show everyone what I could do though so I had to put everything into it that I had left. Before I ran I took a deep breath and told myself that everything I had done up to that point could not be changed now so I just had to let it all go and run as hard as I could on this last event.

It was amazing. I surprise myself almost every time in the 800m because it is not one of my normal events but I’m able to perform very well in it. This summer I haven’t really had anyone up with me to push me in that race so having someone running right with me pushed me even more helping me get that pr. It was actually my only PR of the competition too so having it be the last event ended it on a good note.

8) Coming away from JOs with a 6th place medal,4301 points, and improving your placing from Day 1 - Day 2, how do you feel about the overall performance?

My performance was not what I had hoped for my last meet of the summer season, but I gave it my all and that was all I could do so I am satisfied. My goal was to get top 8 this year and that’s what I did.

9) What was it like to have a solid group of Texas athletes and familiar faces competing with you in Virginia?

It was really nice to have so many familiar faces this year. Last year I didn’t know anyone and it was a little overwhelming at first. This year I felt a lot more comfortable having people who I had competed against all summer and knew coming into the competition.

10) Lastly, you improved on your 10th place 3861 result in 2014. What did you take away from this year's experience that will help you become a better athlete in the future?

This year taught me that I am never out of the competition and can always improve on each event. I just have to refocus after every event and do my best and it will turn out okay.