Heat 10 of the boys mile

Chris Tracht is just a freshman at Southlake Carroll High School, but he's already chasing world records. Born with a partial impairment to his left leg, Tracht wears a prosthetic from his knee down to help him run, which falls under the T44 impairment classification. But that hasn't held him back in the slightest. 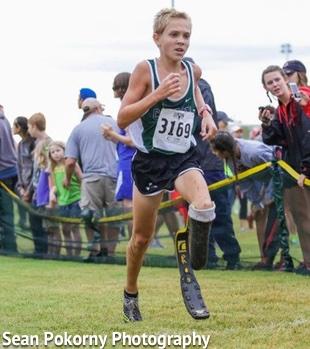 Southlake Carroll head coach Justin Leonard said Tracht, who oftentimes competes in races at the varsity level, runs every workout in full with the team and has never wanted to be treated any differently.
This past weekend at the Texas A&M Indoor High School Classic, Tracht was just off the 1500m T44 world-record pace on his way to completing the full mile. His time of 4:57.19 converts to a 4:35.26 for 1500m and 4:55.47 for 1600m. The current world record is held by another Texan, James Roland Ortiz, who is the head coach at Giddings High School. Ortiz set the record time of 4:33.46 in Lawrence, Kansas, on April 19, 2013, while coaching at Colby Community College in Colby, Kansas. Ortiz, who had his right leg amputated in 2006 after a bicycle crash, is also the American record holder at 4:29.04.
Ortiz says he would love to see Tracht get his world and American record, whom Ortiz first saw compete in the 400 and 800m events in the U14 division at the Endeavor Games in Oklahoma back in 2012.
"He's a stud," Ortiz said.
According to Ortiz, it might be tough for Tracht to get the official world record, but this isn't due to the level of talent he brings to the sport.
"Everything is a fight to get the [International Paralympic Committee] to recognize amputee distance runners due to 'lack of data,'" Ortiz said.
The paperwork that needs to be filled out beforehand is extensive. On the Paralympics website, there are official documents for everything from the Standard Results Template to the Requirements for Hosting International Classification-style events. There is also the Track Record Application Form, which requires several signatures from officials, timers, and classifiers after the event. We reached out to a representative from the USOC to get more clarification on the qualification process but have not heard back.

Ortiz has been fighting for years to get Paralympic distance runners more recognition. Many times competitions will hold events for sprinters but not for distance runners. For Ortiz, the Kansas Relays was a sanctioned event, because it offered 100m and 200m distances for impaired athletes. However, he had to compete in an able-bodied 1500m race to hit the record. His U.S. record is a lower time, because there are not as many stipulations on achieving the American record than the world record.
After a long battle to get more recognition for the sport, Ortiz has gotten away from competing and runs more for the enjoyment of the sport. But he hopes for Tracht's sake that something changes.
"We just have to hope and pray that the IPC gets it together and recognizes there are Paralympic distance runners," Ortiz said.
Ortiz said he's already reached out to the USOC about Tracht's time being included as a record in the indoor mile, but the organization said that indoor records for any distance are still in the works. Ortiz said he might even jump in some races and help push Tracht to the record if he can.
According to Leonard, Tracht is hoping to make a run at the world and American record, official or not, sometime later this season. The big goal would be to hit it at the Texas Distance Festival in March in front of the home crowd, but if not there, then possibly at a pre-district meet.
Related Links:
El Caliente Varsity Boys Chile Pepper Festival Oct 6, 2019
Varsity Boys Rated 3 Mile Run Finals Woodbridge Classic Sep 22, 2019
Elite Boys 5K Finals Marcus I Invitational Aug 31, 2019
Boys Varsity 1600m Action Keller Dave Park Relays Mar 24, 2019
High School Boys' 5k, Finals 2 Texas Distance Festival Mar 16, 2019
High School Boys' Mile, Finals 6 Texas A&M High School Indoor Classic Jan 5, 2019
Tweets by TXMileSplit