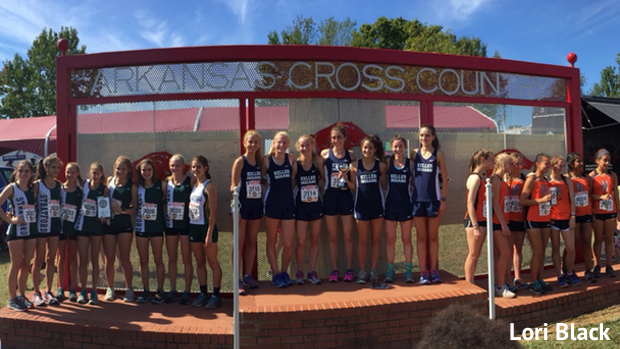 The Chile Pepper Invitational is always an exciting and a quality race.

One thing it definitely isn't is Texas proof.

Texas teams converged on the the course in Fayetteville, Arkansas and performed extremely well. From Texas' top 6A girls team down to 5A and continuing on, the girls as well as the boys from the Lone Star state showed that they should be considered to be a top cross country state nationally.

After a weekend off, the girls from Keller broke out of the gates and didn't stop until they crossed the line with a dominating 50 point performance. Isabel Van Camp led the way with her second place overall finish, followed closely with third and fourth place finishes by seniors Abbey Santoro and Julia Black.

As Keller controlled the race, other Texas teams co-starred as they helped litter the top ten team finishers. Finishing in second place, Houston Stratford scored 168 points as Lewisville Hebron came in fourth with 208 points and Prosper also cracked the top ten with their ninth place finish.

The Texas boys also represented well in Arkansas. Hebron's Adam Dayani finished with a 15:36.40 that was good enough for 4th place. Joining Dayani in the top ten was Fort Worth Paschal's sophomore Whit Dennis with a 15:42.

Team wise, the Smithson Valley took the overall team title as they were led by Clayton Wilkerson and his 13th place finish. The Keller boys and Lewisville Hebron boy joined Smithson Valley in the top ten with their respective third and seventh place team finishes.
Chile Pepper Cross Country Festival