NXN qualifying spots are at a premium every year. This year, the individual and team battles were absolutely bonkers and the drama was nothing short of the typical drama that NXR South seems to somehow be able to kick up every year.

In the team race, there were four or five legitimate teams within reach of attaining the goal they set out to accomplish at the beginning of the season.

The Woodlands (TWHS), had to be considered the favorites heading into the Boys Championship race. They are coming off of last year's NXN wild card bid. They are also are coming off of their third straight UIL 6A state title. At the state meet, they got the victory over Southlake Carroll (SLC) by six points and were ahead of the third place El Paso Eastwood team. 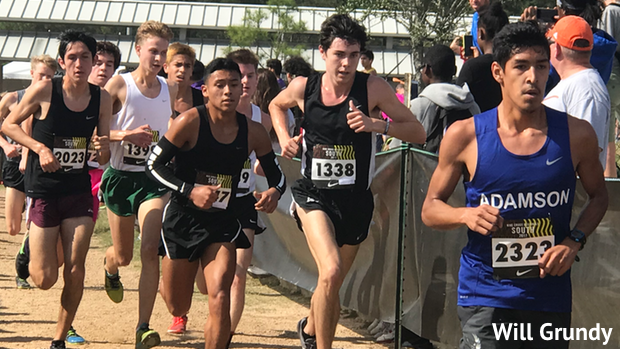 Also in the race was Flower Mound (FM), who had a less than satisfactory finish compared the their standards and recent years.

As the race took out, the FM and SLC were positioning themselves nicely in the race. Eastwood was looking to rebound from a personally disappointing state meet race and they were also looking to position nicely for last half of the race.

As the race continued, FM's Alex Maier and Jarrett Kirk began to move into positions that would help themselves for individual placings, but ultimately put FM in an optimal spot. However, Eastwood was also making major moves in the race as their top two studs Anthony Molina and Gabriel Armijo were positioning themselves and their team well.

It was TWHS and SLC who pack run perhaps as well as anyone in the nation who were a little further back in the race. This is nothing new, as at the state meet, it was TWHS who was out of winning position and made a mad scramble in the last 400m-800m. On this day, SLC performed as close to typical as they could. They are known from running as tight as close as a 30 second split to even getting as low as hitting the 19 second split that he ran at the state meet. Perhaps, it was the close quarters of the Bear Branch Park course that prohibited them from gathering up in the race as they normally do. Their split was astronomical compared to their standards and season average as they finished with a 1:12.47 1-5 split, but that would be good enough for them to qualify for NXN. TWHS wasn't able to get their race together as they finished in fourth place with 122 points. 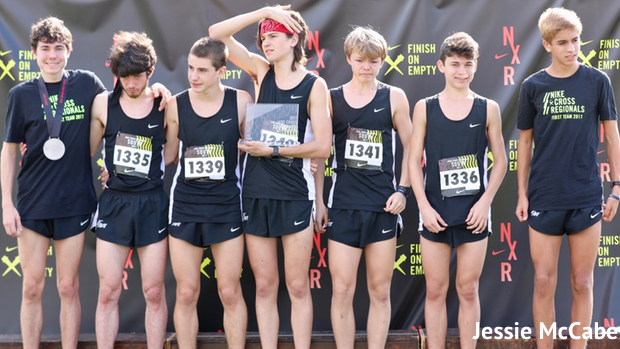 Eastwood ran their hearts out and were optimistic of getting one of the top two spots but fell a little short as they finished in third place just twelve points behind SLC.

For now, Eastwood and TWHS will have to wait for the remaining NXRs to race and see if they can get awarded wild card bids. The only way TWHS could get a bid is if Eastwood gets one as well. A fourth place team can not get a bid unless the third place team ahead of them gets awarded a bid as well. If any other regional favorites don't get automatic bids, that would make things difficult for Eastwood and TWHS to get the wild card bids. 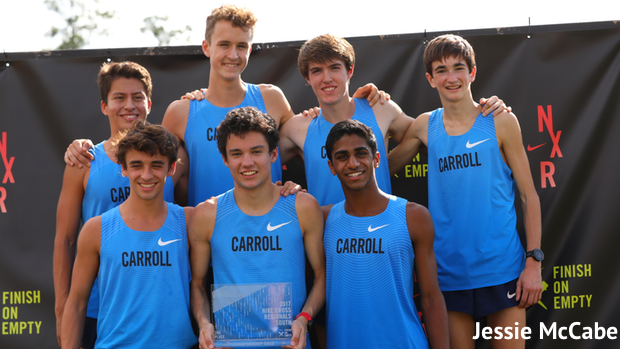 The NXR South champions would be FM. They go from eighth place and  210 points at the state meet to a 77 point performance and the NXR South title. A lot of questions were swirling around All-American Alex Maier after he dealt with a respiratory issues over the last couple of weeks. FM was pretty much written off by everyone outside of the FM family. Today, they showed just how potent their squad can be when they put it all together and now they'll get to show that to the nation.

The boys individual race was just as off the charts. Again, the uncertainty was how well Maier would recover and if he was 100% or close to it. If he were to be well enough, that would set up the much anticipated Carter Cheeseman/Alex Maier matchup. Maier appeared to be well and the race was on!

I felt pretty good, obviously, I don't think I'm quite where I was earlier in the season, but I felt better than I thought I would."

About his forced state meet drop out and the status of recovery, Maier said, "I've recovered from that, I've just been trying to get back, I biked a lot for a while just to try to get over the lung infection and everything. I think that's passed and I'm on the up and up and that's good. I felt pretty good, obviously, I don't think I'm quite where I was earlier in the season, but I felt better than I thought I would." 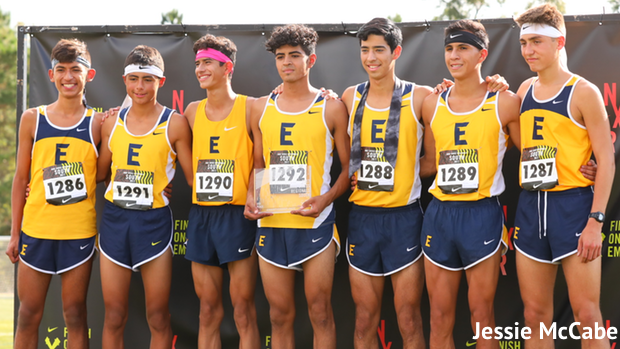 Both Cheeseman and Maier are usually front leaders and are used to taking the race out at their preferred pace. However, the pacing duties would be taken over by Dallas Adamson senior Sergio Armendariz. Armendariz took fourth at this year's UIL 5A state meet with a 15:18.98 and would carry the lead well beyond the mile marker. Eventually, Maier would take the helm and carry that lead throughout the race. Maier looked like he had regained his form and strength from his sickness as he would round the final corner and head toward the finish.

"We knew it was going to be a tactical race, so I just tried to hang in there as long as possible."

However, Cheeseman had held back enough that he would pull up and around Maier and the kick was ON! Last season at NXR South, Maier was involved in another sprint to the finish and finished fourth in a 15:11.61. This year, he would finish as the NXR South runner-up in 15:34.90 behind Cheeseman's 15:34.07. Cheeseman said, "I wasn't really going for the win at all, I was focused on just qualifying." Cheeseman, who not only physically looks like a college level runner, has the mentality and the ability to execute of a runner at the next level as he said, "We knew it was going to be a tactical race, so I just tried to hang in there as long as possible and make my move at the end, and it worked out. It's an added bonus that I was blessed to be able to get that victory." 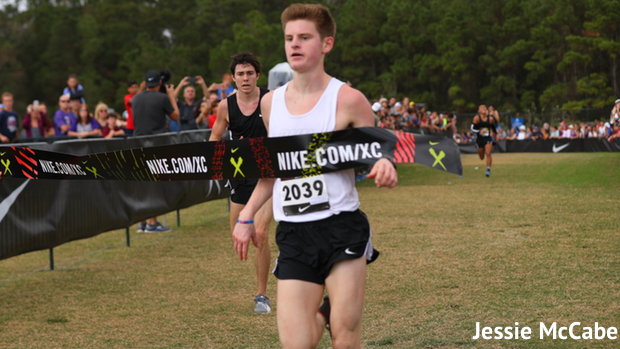 The other individual qualifying spots were still up for grabs. One runner who was running in the front the entire race was PSJA Memorial junior Cruz Gomez. Gomez, who finished fifth at the UIL 6A state meet in 15:13.50 took his chances at the front of the pack and managed to keep contact with Cheeseman and Maier throughout the race. 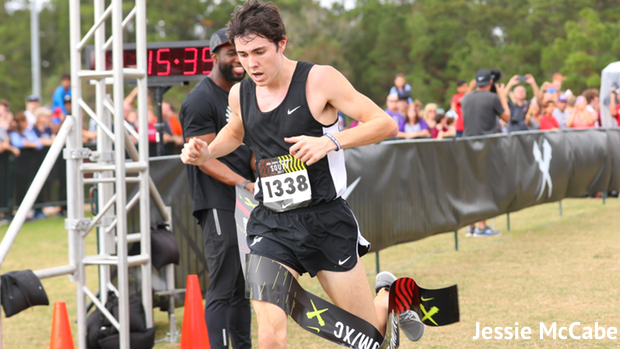 Finishing right behind Gomez was Corpus Christi Tuloso-Midway senior Ace Castillo. Castillo has placed in the top three at the UIL 5A state meet for the last three years. This season got off to an unusual start for Castillo due to the effects of Hurricane Harvey. Harvey damaged the Corpus Christi area enough to make training difficult for weeks as well as causing severl weeks worth of meet cancellations. When Castillo was able to compete, he was clearly behind his competitors fitness level. He was able to get fit in time to finish third at state, but his third fourth place NXR South finish proved that he withstood Harvey and is now on his way to NXN. 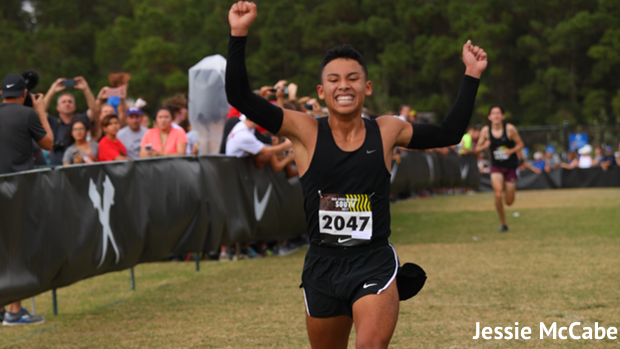 After Castillo, UIL 6A top finishers Gavin Hoffpauir (2nd at state) from TWHS and Kirk (6A state champ) would cross the line in fifth and sixth place. Since Maier and Jarrett would lead their FM team to the NXR South title, their places didn't count against for the individual top five placers enabling Arkansas state champ Carmen Fischer to get the fifth and final individual qualifier.