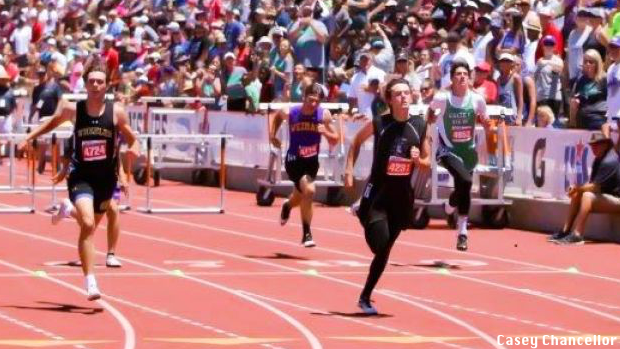 Linday's Josh Wallace will return to defend his 300H title

The 2017 UIL 2A state track and field meet was an outstanding exhibition of small school talent. Just like the 1A meet, there was plenty of excitement to go around the stadium from the shot put ring to the pole vault pit to the track for the sprint and distance events.

There is plenty of returning talent for the 2018 season.

Enter, Lindsay senior hurdler Josh Wallace Wallace qualified for his second straight UIL 2A state track and field meet, but he won his first medal -- medals. He was able to walk onto the track and come away with two PRs, one in the 110H and another in the 300H.

There are two other 300H in 2A that may want you to put some respect on their names. Milano junior Devonte Jones and Hale Center senior hurdler Jace Cannon are both back and they ran Wallace to the line last spring. Both guys are talented long hurdlers and have to be tasting their opportunity to get them a state title this year. Jones ran 38.47 and Cannon ran 38.73 and this year's rematch could be quite an entertaining race again.

Iola senior Tyler Dykes has qualified for the UIL state meet in four different events. As a freshman, he has hit the Mike A. Myers Stadium track in the 100m and he finished fourth. He also made it in the long jump, triple jump and the 200m. Last year, he performed in the 100m for the second time, the 200m, and the triple jump. His big performance was in the 200m where he came away with the state title when he PRed in 21.90. He gets to return this year as a senior with a chance to defend his title. 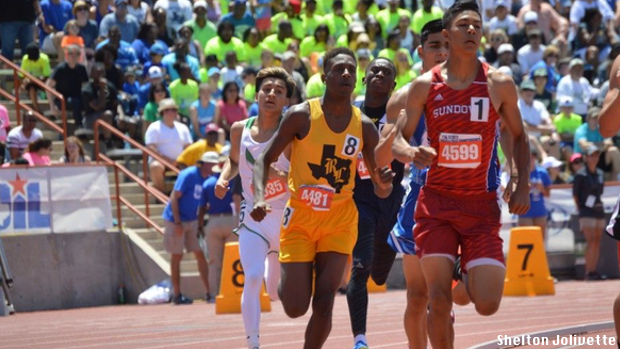 Sundown junior Steven Quintanilla is a utility man. Put him in a Sundown uniform in any sport and he is your guy. In the spring, he is bouncing back an forth between baseball and track and field. At the state meet we get to watch him for a short time before he is on his way to a baseball game. Last year, as a sophomore he was able to capture the 2A 3200 title when he ran 9:41.37 and then bounced back to give the 800m a shot. Quintanilla ran 1:56.94 PR, which was over four seconds faster than his previous PR. He wasn't done improving, as he ran anchor leg on the 4x4 when he dropped a 49.72 split. His 400m PR is 55.48, but he blasted around the track for the last time of the year. We will get to borrow Quintanilla again for the 2018 state track meet, let's see what kind of times the bump up in competition at state will lead him to run this year.

The track isn't the only place 2A big time competitors return and Quintanilla isn't the only Sundown athlete looking to win a state title in 2018. Sundown senior Bryce Spencer placed third in the 2017 discus competition. This year, he is the top returner from last year's 2A state meet. He threw 152-10 for the bronze last year, but he has a 158'9" PR and could toss it further this season. Spencer will have to battle Thorndale junior Corey Preusse took fourth place last year witha 151'05" toss and will battle for the top spot.

Granger junior shot putter Ryan Pickett is the defending 2A champion. Pickett's sophomore campaign saw him toss 53'4.5" winning toss was a two and a half foot PR. With two more years of competing, he could become the next big time thrower in Texas.

Can Alexa Valenzuela Become The 2A Sprint Queen?

On the 2A girls side, there are a bunch of returning champions. One of them is Refugio junior Alexa Valenzuela. Valenzuela will begin her 2018 season with four UIL 2A state meet gold medals and one silver. She won the last two 200m championships, as well as the long and triple jump as a freshman. Last year, Valenzuela placed second in the 100m and eighth in the 400m.  Can Valenzuela make a run for a win in the 100m, 200m, and 400m and jumps?

The 2A distance girls should also provide some entertainment. Valley Mills junior Hannah Dillard, Hamilton senior Sydney Lengefeld, and Santa Maria sophomore Kristen Aleman could have a replay of last year's 1600m race. The 2017 race saw the three ladies battle it out for the silver medal. Dillard and Lengefeld ran virtually step for step throughout the four laps as Dillard came through with second place in 5:22.02 to Lengefeld's 5:22.06. As a freshman, Aleman was right on their tails with a 5:23.46. You don't want to miss the rematch!

There was also a hot match up in last year's high jump competition. Lufkin Pineywood's Tina Douglas and Zoe Spinn of Holland jumped it off last year. Douglas won the state title with a 5'7" jump and three good attempts at 5'8". Right on her tail was Spinn at 5'6". Both girls are returning seniors and could provide another good jump off at the 2018 competition.

When people say small school kids participate in almost every event they can, it is not just a saying. Take Summer Grubbs of Gladewater Union Grove for example, Grubbs has competed in just about every event you can imagine. She has qualified for the state cross country meet, and for the state track meet in the 3200m. She has also ran the 800m and the1600m in regular season meets. But, wait, that's just the beginning. How many cross country runners do you know that are good enough to qualify for state meet can boast that they are the state long jump champion? That's right, last year, the distance runner won the state long jump championship and also placed seventh at state in the 200m last year. Grubbs was also on Union Grove's relays. Perhaps that's how Union Grove has been in the mix for the team state title the last few years. Union Grove used their swiss army knife distance runner who might not really a distance runner and might be a sprinter and jumper to win the 2017 2A team championship. Grubbs will compete in 2018, the question is just what events will she compete in.

Seagraves junior Sirena Minjarez  won last year's 2A shot put championship. As a sophomore, she threw a 39'10.25" to win the title. Minjarez will be looking to win a second and possibly a third title unless someone can come in and dethrone her. She has a 40'10" PR, so she could be ready to throw as far as she needs to.

Sticking with the field event girls, Bonnie Wilkinson of Roscoe is the 2017 triple jump champion. The junior returns after winning with a 36'11.5" jump. The 2018 2A girls will have to dethrone the champion if they want to get themselves a gold medal.