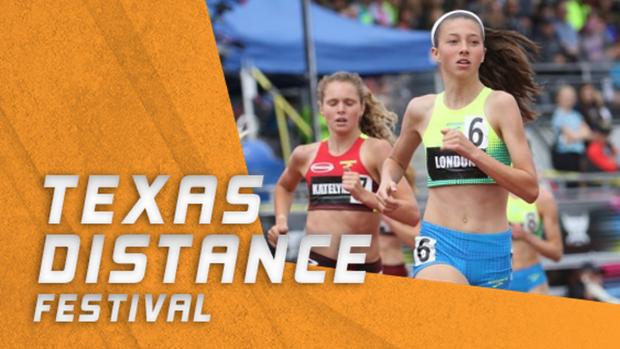 Last year, as a freshman, there wasn't much that McKinney North distance star London Culbreath didn't accomplish over the course of the season.

She won state titles both individually and with her team, broke records, and was also invited to several national meets. Among those accomplishments, Culbreath won the girls elite 5K at the Texas Distance Festival.

But she didn't get the record.

"I'd love to PR from my last time at this meet and get the record," Culbreath said.

"I've really been looking forward to this meet. I'm excited to be able to change the main events I run during track, like the mile (and) 2-mile, to a 5K, which is normally during cross season. It's a nice mix mid-season."

The second time around could produce the kind of time the sophomore was aiming for last year, when she set centered her hopes around an effort in the 16:30s. A year ago, she crossed the line in 17:08.42, which was just five second shy of breaking Southlake Carroll graduate Courtney Kriegshauser's meet record of 17:08.42, which was set in 2013.

"Last year I definitely underestimated the 5K on the track," she said. "I came into it thinking it would be a breeze, way easier than a 5K during cross because it's a flat surface and there would be no hills to slow me down. But I was very misled because a 5K on the track is particularly tough.

"It was easier to get my splits but harder to hit them with the overwhelming number of laps. Overall, I think I like doing a 5K better during cross but I'm excited to change things up and do another one on the track."

Being the cerebral runner that she is, and having the guidance of McKinney North head coaches, Culbreath could potentially make the necessary adjustments and break the record on Saturday.

She says she's been putting in the work to address this type of midseason race.

"To prepare for this meet I've kept a medium-high mileage to make sure I still have the endurance from cross, and although we aren't on the same mileage as cross we are giving my body a similar feeling I guess," Culbreath said.

With all of the mileage she has put in to be able to run a fast 5K this weekend, Culbreath still ran a fast 800m in March.

"I think that my 2:13 800 time is an indication of the leg speed I have," she said. "However the 5K race is night and day compared to the 800 so I don't feel that it is as necessary or beneficial in this race until the first and last laps. I think the 5K race will be more focused on endurance and being able to keep a fast pace for a long time."

Even while on spring break and taking a family trip to Colorado, Culbreath was still at it getting some final race specific workouts.

"We were also doing 5K pace-specific workouts on the track and I was able to do a bit of my training in altitude over spring break while I was on vacation."

If the record comes this weekend or not, Culbreath said she'll value the atmosphere at the Texas Distance Festival.

"I really love the idea of a meet for distance runners, because a lot of times I hear that people think that distance races are boring or the only kind of interesting race are the sprints," Culbreath said. "But it's great to see the support from fans at the distance festival because in a way this meet helps give us distance runners a little more excitement or appreciation than in other meets.

"Having people lined up on the infield does bring a little bit of a XC vibe but it has its own distinct track vibe itself. While I'm running an XC race people are kind of just scattered everywhere and you don't really know exactly where your coach, teammates or parents will be. But in track I know my coach is by the 200m mark, my parents by the start (and) finish, and my friends screaming their heads off running back and forth on the infield." 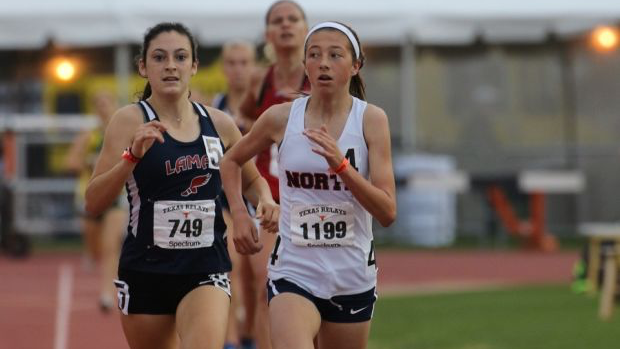 We've seen Culbreath run everything from the 5K down to the 4x400 relay, so what is her favorite race?

"The event I prefer on the track is probably the mile because to me it feels like the perfect distance, not too long, not too short. But I love doing different events like the relays and 800s because I get to use my speed and can approach races with a different strategy than normal."

And the head band snatch during a recent 4x400?

"Well that lucky white headband has gotten so old and I've worn it so many times (every race) that it has been stretched out and it slides off my head," she said. "So this happens every once in a while, and most the time I can fiddle with it to get it back in the right spot but when your in the 4x400 there is no time to spare. I didn't want it to fall off but I didn't want to waste energy fixing it so I just snatched it off and ran with it the last 100 meters. But I guess to viewers of the race, the headband snatch gave a more dramatic effect to the race."

One thing is for sure: Culbreath will be dialed in to the race this weekend.

"In every race that I'm running I'm always focused on pace, time, and whether or not I'm going fast enough," she said. "I usually don't take my mind off of those things while I'm running in order to keep myself 'in the race,' because if I get sidetracked it's likely I will slow down or lose the mental component of running."

Although the goal this weekend could be to PR and for her to go after the record, she will be focusing on things for herself.

That is still good news for the rest of the Elite Girls 5K runners. They know exactly what time Culbreath is gunning for, so they'll have an indication of what kind of pace it'll be.