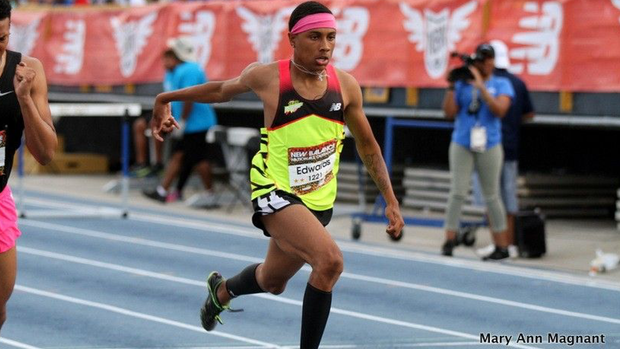 University of Oregon signee and hurdle star Eric Edwards had expectations for an out-of-this world senior track and field season.

He was coming off a 2017 campaign that saw him win the UIL Class 6A and Great Southwest Classic 110 hurdle titles. And that was just the beginning, as things eventually led to Edwards winning the USATF Junior National Outdoor T&F Championships as well as the gold medal at the Pan-American Junior Athletics Championships for Team USA in Peru.

Edwards' 2018 season started off as expected. He was able to reel off several indoor races that would result in big-meet victories, making him look practically unbeatable.

But about the only thing that could stop him from dominating the 2018 season was injury, and it did.

Edwards started racing the first week of January when he ran not only two of the fastest 60mH races of his life, but also ever by a Texas athlete with his 7.78 at Texas A&M High School Indoor Classic and his 7.66 at Texas Tech Under Armour High School Classic.

However, by early February, his season was done for good due to a hamstring injury.

Now it's June and the school season is complete, but there are a couple of post season championship meets coming up and Edwards still has the itch and the determination to make something of his senior year.

Although not 100-percent healthy this weekend, Edwards will compete in the Brooks PR meet in Seattle, Washington. 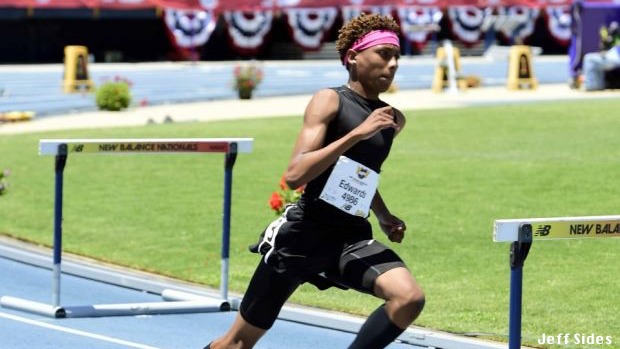 So, why would he attempt to run in a high level meet if he wasn't 100-percent? Well, the thing is, he wasn't really 100-percent at any point this season.

Back in January, when Edwards was reeling off those astronomical 60mH times, he wasn't really in tip-top health then, either. He initially injured his hamstring months ago, saying it was "the beginning of December is when i strained it the first time."

There were parts of the season where he thought he would be able to mount a comeback. Through the recovery and rehab process, Edwards would progress and have hopes to getting back on the track in time to resurrect the season.

"I would say there were about a total of four setbacks," he said. "I would go through rehab but I would end up re-injuring my hamstring because I would do too much at one time."

The remainder of the season would be a tough one to watch then.

"I took it pretty hard, missing my senior year with goals in mind took an effect on me mentally."

Watching the meets go by and seeing his teammates boarding the bus heading to the next meet was tough. What was even tougher, though, was watching his competitors run the races he should have been running. It all took it's toll on Edwards.

He said, "It was painful watching my peers progress through the season especially at the state track meet."

However, there was one reason he was able to make it through this tough time, "Constantly talking to God, when I felt depressed or anxious I would talk to God and trust his plan," Edwards said.

That plan looks to lead to a big showdown for Edwards this upcoming weekend.

"I have no expectations this coming meet, i just hope to finish healthy," he said. "If I can leave Brooks PR healthy I will run the 110s at USA trials to try and compete for the USA team again in Finland."

"Sitting out this season gave me a different perspective on the sport of track and field. It opened my eyes and allowed me to understand that something you love can be taken away from you in a heartbeat, though my career is not over, it hurt just to watch what i love instead of doing."

It now looks like the watching is finally over for Edwards and we can get back to watching him race.