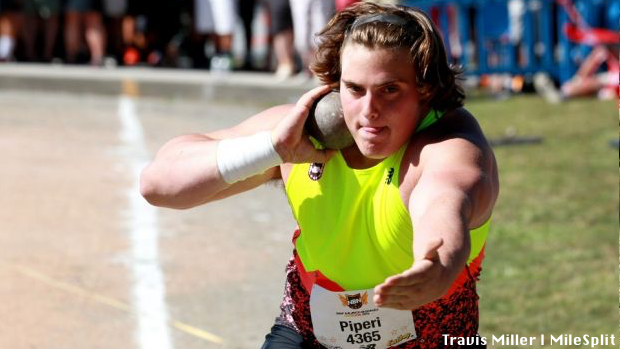 Adrian Piperi is scheduled to be a freshman at the The University of Texas this fall. However, before he reports, he will get to enjoy his time in Tampere, Finland as the new American Record Holder.

Today, Piperi qualified for the shot put finals with a 21.42. Piperi threw the bomb on his first throw and shut things down for the rest of the competition. That one throw held up for the entire flight of Group A as well as the Group B flight.

With a top throw by over an entire foot, Piperi looked to continue a dominance he started back in high school heading into the finals.

When the finals came around, things got even more serious and the stakes got higher. Piperi would do battle against Kyle Blignaut, the South African stud who was just as imposing in stature as he was in strength and talent. Piperi, is not usually one to back down, so he rose to the competition as he and Blignaut would take turns throwing bombs and wowing the crowd.
Blingaut would eventually top out with the win the gold with an outstanding 22.07 throw to edge silver medal winner Piperi who tossed a 22.06. Piperi's toss was an American U20 record, "Obviously, I went into the competition wanting to win but I threw a personal best and national record so I can't complain."

RECORD ALERT @Tripp_Piperi sets the Area & American U20 Record (22.06m) in the shot put to take at the IAAF World U20 Championships!

In his prep career at The Woodlands High School, Piperi won four individual state titles in the throws and has qualified for the 2016 IAAF American U20 team and last year's Pan American team where he won the bronze medal for the US team.

As a freshman, this season, he was seventh at the NCAA Indoor Championships and fourth at the Outdoor NCAA Championships. Afterwards, he went on the win the USATF Junior title.

Piperi will soon head back to Texas, but it will be with another passport stamp, an international medal, and  an impressive resume builder.