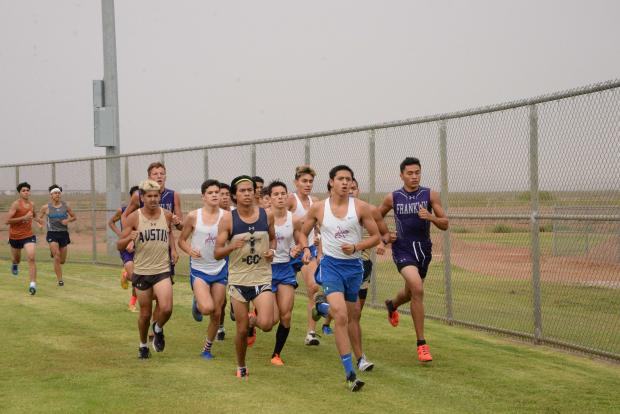 The Lead Pack of The Boys Race

Next week many of the team in the city will be heading out of town to compete at bigger meets for exposure to new competition or to gain some experience on the regional course. Before we get to that let's take a look at what went down this weekend at the Parkland/Riverside Invitational.

Yesterday the runners were treated to gorgeous weather consisting of overcast and light showers. On top of that the course they ran on yesterday is perhaps the flattest course in the city. All of this was the perfect set up for the runners to run some fast times.

Once 8 A.M. rolled around all eyes fell on the girls as they toed the line on that perfect Saturday morning. For good reason too, many were curious to see how the Americas girls would do with their number one runner competing this weekend. Would she be able to help her team out in beating Coronado and bridge the gap between the Trailblazers and the  Franklin Cougars.

With the firing of the gun Franklin junior Eva Jess shot from the line without hesitation to take her position in the front of the pack. Americas senior Mariana Guzman was not one to easily let Jess do as she pleased, and she took off after her. In the early stages of the race Jess held her usual first place position but Guzman was not far behind. Jess continued to press on pushing the pace little by little and managed to finish thirty-nine seconds ahead of Guzman, with a time of 17:51.64 to Guzman's 18:27.33. Thirty-nine seconds may seem like quite the gap for most but this time around it's quite the impressive feat. As this is the closest anyone from El Paso has finished to Jess. Once again the Cougars showed why they are the best girls team in the city. The Eva Jess lead squad earned first place with a total of 34 points. Although Franklin were the clear winners this week it was a lot harder to figure out the second and third place finishers.

The race was quite close between the Coronado Thunderbirds and the Americas Trailblazers. Guzman's valiant effort of chasing down Jess was followed up by Coronado freshman Kyra Walker finishing in third. Both teams would squeeze another runner into the top ten. Fellow Trailblaze Daphne Duran would be the first runner between the two schools to get their second runner in. She would claim fifth place in a time of 19:20.73 but not six seconds later Coronado followed up with Sofia Flores' seventh place finish in 19:26.54. After the first two runners finished, Americas was ahead by a mere three points but Coronado was not one to take that lightly as they would get their third runner in before Americas. This would put Coronado at 20 points to Americas 24 with the addition of the fourth runners the four point lead would diminish to a mere one point, 41 to 42. All hopes were on the fifth runner of both girls to either keep the lead or upset the current standings. It would be Itzel Garcia of Americas that would be the hero of the day as she came in before Coronado's fifth which was enough to upset Coronado's lead and earn second place by two points. Coronado would finish in third with a score of 63 points while Americas claimed second with its 61 point team total.

The varsity boys was quite different from that of the girls race. The boys were pretty close in both the individual standings and the team standings.

With the sound of the gun the Americas boys took to the front but they weren't alone as many runners from other schools went with them, most notably runners from Coronado and Franklin. In the early stages of the race this front pack consisted of around ten people with a few straggling behind. This pack would ultimately stay together for most of the race, it was until after the second mile that three of the runners would break free. These three would be Coronado senior Nicholas Gonzalez, Americas senior Jacob Ye and Franklin senior Fernando Morales. The three would stay side by side until about 200 to go. Gonzalez would then make a quick break that the other two were just a little late on covering. This move would garner the win for Gonzalez with a time of 15:19.21. Ye would come in second with a time of 15:22.23 and Morales would be closely behind in 15:23.42. Nicholas Gonzalez Kicking It In For The Individual Title

The Americas squad led by Ye would claim the team title with a low score of 36 points. The Trailblazers would place all five of their scorers into the top ten to help establish their dominance at the meet.

The team battle for second would come down between Franklin and Coronado. After Morales third place finish the Cougars would sneak in senior Daniel Kennedy in fifth place. Coronado senior Alan Alba was not far off, in fact he was the runner to finish after Kennedy. At this point in the race Coronado was ahead by one point. Next came each schools third runner and with this it brought a few more points for Coronado. Coronado was now ahead by four points, with this trajectory it seemed like Coronado was going to gain even more of lead over Franklin. However Franklin quickly ended that train of thought with their fourth runner finishing immediately after their third. Unfortunately for Coronado they weren't able to squeeze their fourth runner in between Franklin's three through five runners. As if taking a page out of Franklin's playbook, Coronado would get their fifth runner in immediately after their fourth finished. These close finishes for both teams was enough to even out the scores so now it came down to the sixth man. Franklin's sixth runner, sophomore Ismael Chavez, was not one for letting others have an easy race. Chavez hung on tough to his fellow teammates throughout the race which helped him come in before Coronado's fourth runner which would secure second place for the Franklin boys. Coronado would take third to round out the top three boys teams.

Both races previewed what is to come later this season at the District 1-6A meet. I'm sure this meet helped point out what each team needs to work on in order to hopefully earn them the district title.