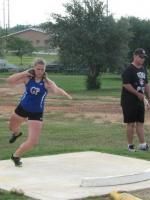 Teel & Warren-Jacques throw their way onto MileSplit Al...
Haley Teel and N&#39;Dia Warren-Jacques ranked among the nation&#39;s best in the shot put with their season best performances and Texas state titles. Their performances earned them spots on the MileS...

MileSplit All-American Team - Girls Shot Put...
The following 8 individuals have been selected to the MileSplit All-American Team in the girls shot put from the 2014 outdoor season as they have been chosen by MileSplit as the 8 best national perfor...
Txrunning Athlete of the Week 4A- Field...
Scott W. Coleman Congratulations to Haley Teel  Gregory-Portland and  Keandre Bates El Paso Burges for earning Txrunning 4A Athlete of the Week- Sprints   ...