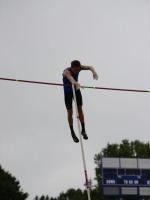 Florida Native McMichael Qualifies for NCAA's In Pole V...
One of the best pole vaulters in Florida history is set to compete at the Division One NCAA Championships this weekend in Eugene, Oregon....

Vote For Florida Boys T&F Athlete Of The Year...
We want to know who you think was the best boys track & field athlete for 2015 in the state of Florida. Vote below before the deadline Sunday, August 2nd at midnight!...

College Recruiting Tips: Drew McMichael...
July 1st marked the initial contact period for the class of 2016 athletes to be recruited. We reached out to some of our top 2015 standouts to get their take on the process and offer advice....

Salute To Seniors: Drew McMichael - Evangelical Christi...
The 2014-2015 school year has provided some great highlights in both cross country and track across the Sunshine State. In the coming weeks many of our seniors will head out to start their college car...

NBNO Recap: Florida Athletes Come Home With National Ti...
Florida's best headed to North Carolina for New Balance Nationals Outdoor, a chance to prove they are the the tops in the nation and earn All-American honors. Check out our day by day recap of all the...