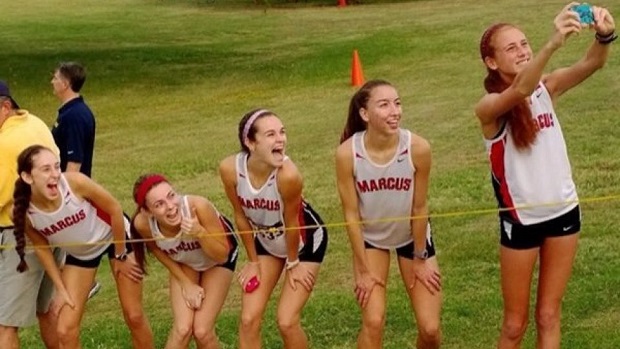 If this these girls continue the improvement arc they charted in the spring, they could be posing on an awards stage in November.

We're entering the region of the countdown where teams don't just have strong returning numbers from cross country season, but also great track results.  Times from outdoor season aren't the be-all, end-all of our analysis, to be sure, but they do indicate two things in my experience: continued year-round training (which is key for developing cross country runners), and potential breakout stars.  Take the Marcus girls' team, for example.  The Marauders have Madeleine Reed up front, and she has the 12th-fastest returning 5K time in Texas; in the spring she ran 10:35.97 for 3200, which is the 4th-fastest returning mark.  That's progress, and it happened team-wide: Marcus ranks 3rd in the state (all classifications) in team 3200 rankings and 2nd in the team 1600 rankings, putting 3 girls under 5:10.  In addition to Reed, who also ran 4:59 in the spring, Payton Brown broke 11 for the 3200 and last year's #5, Hannah Bradley, clocked 5:09.  The Marauders didn't make it out of Region I in 2013, but they only lost 2 from that squad, and have another 2 seniors in.  That's a very manageable turnover rate for a team that's improving rapidly, and the combination of those two factors could catapult this team into title contention.