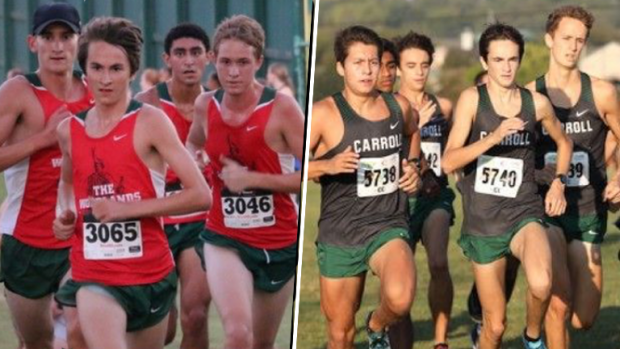 For El Paso Eastwood, it looks this might be their year. Flower Mound is very scary. Klein came out of nowhere and they are surprisingly very good. College Park runs as pack and is experienced.

This might be the year for all of these teams. Eastwood looks like they are for real. They have the number one team if you look at the numbers. Flower Mound has one of the best one two punches in the nation. They could go 1-2 at the state meet. Klein's line up can match up with anyone in the state. College Park is also as talented as anyone and these boys are for real.

Coming into the season, The Woodlands (TWHS) and Southlake Carroll (SLC) had to be considered as the favorites.This year seems like as level of a year across the board as there has been in a long time. A lot of the time the winning team has a front runner that will battle for the individual championship and bring in only one or two points for the team. SLC doesn't have that prototypical front runner and neither does TWHS.
That makes them vulnerable. Both of those two team's strength this year is having a solid five to seven runners. However, that is the same strength of about four or five other teams.
Team averages are almost even across the board, splits are pretty close. This year's UIL 6A race looks like it could be a wide open race and could be won by anybody.

Does any of it really matter?

TWHS are the back to back UIL 6A champions and they are going for their third straight title. In those two years, SLC was the runner-up. Before the current TWHS streak started SLC had won four straight titles from 2011 - 2014 and TWHS was second in three of those years. Before that, it was a couple of years of TWHS taking home the title. Are you starting to get the picture?

Only one other school has won a top two trophy in the last eleven years. This is more than a decade long thing and it stretches way past that.

Dating back to 1980, there have only been five teams besides TWHS or SLC to win the state championship in Texas' largest classification.

In 1980, Pasadena Dobie won the 5A championship over the individual state champion Kyle Wright, Conroe McCullough (now renamed TWHS) and his McCullough team. From 1976 - 1996, Conroe McCullough was a middle school as well as a high school housing students from 7th-12th grades. The legendary Dan Green was the coach of McCullough and eventually transitioned over into TWHS with the high school students where he coached until his retirement. Eventually his son and current TWHS coach Juris Green (2017 USTFCCCA National Coach of the Year) would take over the program.

Conroe McCullough would win the next two state titles and actually would take every one up to 1990 except for 1983 when El Paso would win take the state title that year and in 1988 when Humble Kingwood would win their first title.

In 1991 and 1992, Houston MacArthur, who had been a strong teams for several years won consecutive state titles over runner up Kingwood.

Kingwood then went on to win their second state title and they wouldn't finish until they won six consecutive state tiles from 1993 - 1998, which was at the time a UIL record until recently broken by the current Luling streak in the 2A/3A classes.

That was the last time to this date that anyone not named TWHS or SLC would win a boys cross country state title in UIL's largest classification.

Since 2005, it has been all TWHS and SLC to winning 97% of the two state trophies given per year. Back in 2011, SLC won the title, TWHS finished 6th, that was the only year they didn't go first and second.