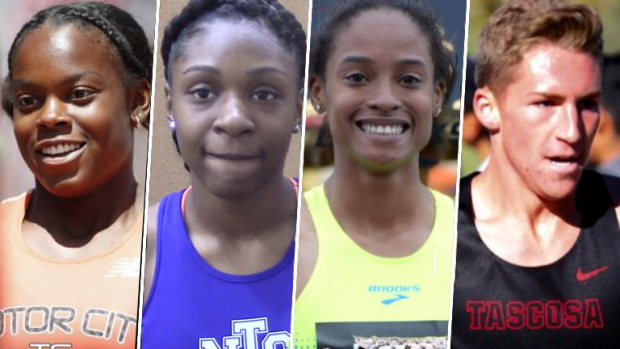 At the Texas Tech Open, they will take on college athletes as well as unattached and some professional track and field athletes.

Some of the Texas high school athletes who will compete are:

Brown will look to possibly get in her first 100% healthy competition after battling an upper respiratory infection and ear infection for most of the high school indoor season. With at 7.59, Brown is ranked #7 in the nation in the 60m and could improve on that rank and time this weekend.

Hollis transferred from Lancaster to DeSoto and will have to sit out the varsity level and compete on the JV level this season. Hollis will look to continue to get every meaningful meet and race she can for the 2018 track season. Nationally, Hollis ranks #10 in the 60H with a 8.71 and #5 with a 24.17 in the 200m. Don't be surprised if she climbs the national list with not just one, but two faster times this weekend.

Moore will compete in the triple jump, an event that may be named after by time she graduates. Moore has the best jump in the nation this season with her 42-9.5. That jump just so happens to be the National Junior Class triple jump record and it just so happened to be accomplished at the exact same facility and pit. That day, Moore had a jump that looked like it may have been a 43 footer, but she scratched the jump by a toe. Watch out for the updates from this event, the record could very well be extended!

The last time Lear hit the track it was on the Texas Tech track. What she was able to accomplish on that day was outstanding. Lear went for a US #7 24.30 in the 200m and US #1 53.89 in the 400m. Watch out for what ever may happen when she lines up with collegians.

Like the girls ahead of her, Blackmon's last race was also on this track and she also had a good day. Blackmon ran 26.21 and 54.90 that day good enough for a US # 6 and #4. Blackmon is having a statement type of indoor season and getting to mix it up with college and professional runners could have a bigger impact on the high school national rankings when this is said and done.

McPhail didn't have the end to the cross country season he was expecting, but that seems to all be in the past now. McPhail also had himself a dandy of a day at the Texas Tech Under Armour HS Classic just like the other athletes on this list. McPhail had a busy day that day with the 3000m, 800m, and 4x800 relay. This weekend, McPhail will take on the college guys in the mile and the 3,000m. If the college guys can put on a solid pace for McPhail, he could very easily run to the top of the national lists in both events.