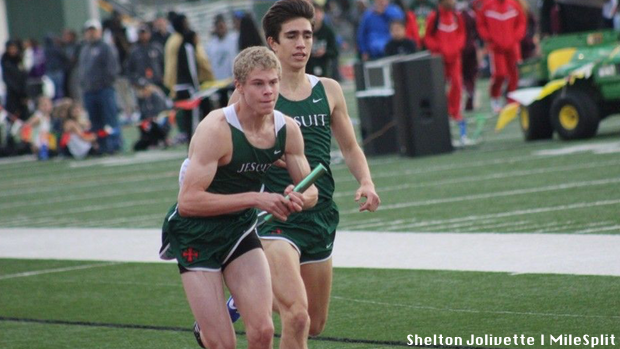 Matthew Boling knows something about competing at the state meet. As a sophomore, he qualified in two individual events last season. Boling came away from the 2017 UIL 6A state meet with a lot of experience and two close misses at medaling.

The Houston Strake Jesuit junior took fourth place in the 400m with his 47.43 performance and the long jump with his 23-7.25 best jump of the meet.

Those are his two favorite events in the sport, the "Long jump and 400 are tied," Boling said. Boling has been improving at both events since his freshman year.

In his first meet in a Strake Jesuit uniform, he jumped a 19-7 in a sub varsity meet. He then ended up with a 22-4 freshman year SB. That led to an outstanding 23-10.5 improvement last season and now he has gone for a 24-2.75 PR so far this junior season.

Boling has also dropped his 400m time each season while at Strake. He has seen his time go from 53.97 in a sub varsity meet to a freshman year SB of 50.42. From there he consistently lowered his time until his best was 47.38 as a sophomore. This year, he has already improved on that 400m mark. Last week, he generated a new 47.16 PR with his UIL 6A - District 19 finals win.

"In the long jump, you get a new opportunity to get a good jump on any attempt, so it's a fun competition and anything can happen. In the 400m, it's a long sprint so you can really see the hard work you've been putting in each week as your times keep getting better."

That hard work isn't just limited to the long jump and the 400m -- and neither are his athletic capabilities. Boling has the jumping events covered as he is good at the other two jumps and he has added another sprint event to his arsenal.

And... Matthew Boling springs his way to a long jump victory with a distance of 22'5.95"#elevate #sjtrackfam pic.twitter.com/cpVvCEG0wk

Boling has been competing in the high jump at an elite level while in high school. He has PRs of 6-5.25 (indoors) and a 6-7 (outdoor) best. Add his 42-5.5 triple jump abilities and he is a universal jumper.

This season, the new rush for Boling has been the 200m. "I'm also starting to like the 200m a lot, just because it's new to me and I'm starting to improve a lot in it."

So, that's five quality individual events that Boling is capable of participating in.

The coaching staff should just let him loose on the track and in the field and just let him go get as many points as possible, right?

Well, it's not that easy. Having an athlete with the ability and versatility that Boling has is a blessing. However, it also becomes a managing/strategic issue to develop him and utilize him for both his personal best interest as well as for the best interests of the team.

Boling's Strake Jesuit team has a good shot at a Region 3-6A team title and even a shot at a state meet award stand finish. That is in result to several other top level individual performers and a couple of big time relays.

And of course, Boling is a part of those big time relays.

Their 4x100 relay is also very capable of making it to state. They check in with the #8 time in the region, but just hundreds of a second from being in the top five and a couple of tenths from being in the top three and not far from qualifying for state. With Boling on the anchor leg, he is just the type of Superman that can make the difference with his heroic type of efforts and top notch athletic ability.

Nobody outside of the Strake Jesuit track and field coaching offices really know what all he will compete in at Regionals other than Boling himself,

But, one thing is for sure, he is one of the best track and field athletes in the state of Texas. Enjoy watching him while you still can!