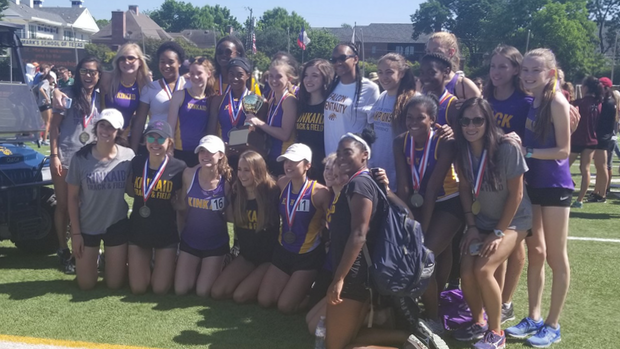 Written by - Mylene Cannon
After producing amazing performances at the SPC Championships, the girls of Kinkaid School and the boys of Houston St. John's High School took home the overall team titles. With a total of 213 points, which is a team total point record, Kinkaid took the crown back to Houston, Texas. Hockaday School was the girls runner up with 171 points and Greenhill School followed with 114 points.
Overall, many individual athletes in both running and field events delivered quality marks, at the championship track meet. Many athletes defended their championship title while others moved their way to the top to prove themselves as worthy as their competitors. Plenty of meet records were also broken at the championships. Of the eight records that were set, Crayton Carrozza, junior from  of Austin St. Stephens claimed three new records while taking home his championship title. In three distance events he clocked times of 1:53.47 in the 800m run, 4:16.52 in the 1600m run, and 9:15.93 in the 3200m run.

Crayton Carrozza leads into the bell lap and takes home the victory in the boys 1600m run in 4:16.51 pic.twitter.com/xOOumwPp7u

St. John's High school also claimed three SPC records, one of them being an individual and the other two on relays. Collin Fullen was a part of two of them, equaling the 100m record in 10.57 seconds and creating new 4x100m relay record in 41.61 seconds along with Will Marx, Ian Tahkur, and Genson Hooper Price. Marx, Tahkur, Hooper Price, and Lethan Hampton took home the 4x400m relay in a record time of 3:20.95 seconds, beating the previous one that was set in 1979.
On the women's side, Kinkaid school left the championship with two records. Kennedy Gamble was part of both of them, claiming the 200m in 23.96 seconds and the 4x100m relay, along with Katelyn Gamble, Allisonn Favaloro, and Emma Sykes, with a time of 47.61 seconds. Kinkaid School also took 4x400m girls relay title, and Austin St. Stephens and Hockaday School were winners of the boys and girls 4x800m relay.
Event sweeps occurred as well. Adoette Vaughan of Hockaday was crowned the girls 800m and 3200m run and defended her 1600m title. Emma Skyes from Kinkaid School saw the finish line first in the 100m hurdles and 300mh and Jamal January from Austin St. Stephens was also victorious in both of the boys hurdle events, as well as the long jump.

Preston Swiggart (@Pswiggster) of Houston Christain is the @spcsports boys high jump champion with a leap of 6ft 6in. He tells us about how the attempted to break the meet record and his future college plans. pic.twitter.com/4Dmdpuixmj

In the field events, Esohe Asuen, of Houston Christian, defended her title in the high jump, and Preston Swiggart attempted to create his own meet record as he crowned the high jump. From Kinkaid school, Lydia Patterson was able to overcome an injury from the previous season to win the girls long jump. Jamie Tatum from Houston Episcopal out threw her competitors by over 15feet in the discus with a throw of 130ft 4in.
Next year, the SPC Championships will take place in Houston, Texas where many young athletes will continue to establish top notch performances in their career.
Tweets by TXMileSplit