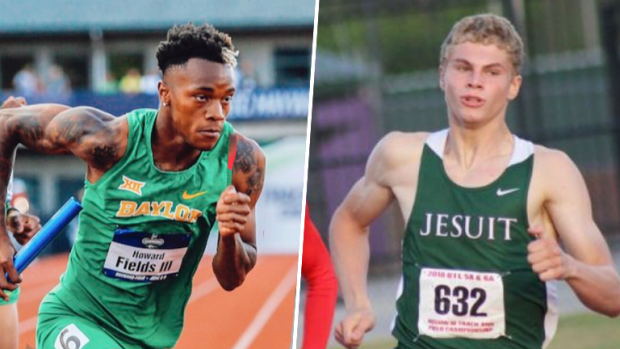 Fields, who qualified for the NCAA West Regionals in the 400m as a freshman is fresh off of a 4x400 relay finals appearance. This week, he was back at it in the open race. The 2017 UIL 5A state champion, Fields is looking to add another champion title to his resume. He entered the meet with a 45.66 PR and he was able to cruise to a heat 3 victory and the third fastest time from the prelims. That should give him a lane three draw with the faster two times in lanes four and five right in front of him.

Boling, the 2018 UIL 6A long jump champion also competed in the long jump this weekend as he finished sixth with a 23-11.5 jump. Boling was also the UIL 6A runner-up in the 400m. He came into the 400m fresh off of a Brooks PR race that wasn't quite to his liking as he ran 47.31 for a third place finish. He remedied that race with a 46.51 for third place in heat one, but good enough to the finals.

With three previous 46 second races on the year, Boling's 46.15 PR proves that tomorrow he could definitely be in the mix for a Team USA spot.

Other Texans that performed well were University of Houston freshman and DeSoto alumni Quivell Jordan and Mississippi State freshman and Plano alumni Charles Brockman III. They had great results in their specialty 400H race.

Jordan and Brockman III are two Dallas area hurdle studs who have had their fair share of hurdle battles form their high school days. Well, they had one more today as collegiates.

Both guys ran fast times with their 50.x races. Jordan took second place firmly placing him on the team with his 50.21 and Brockman III was third with his 50.54.