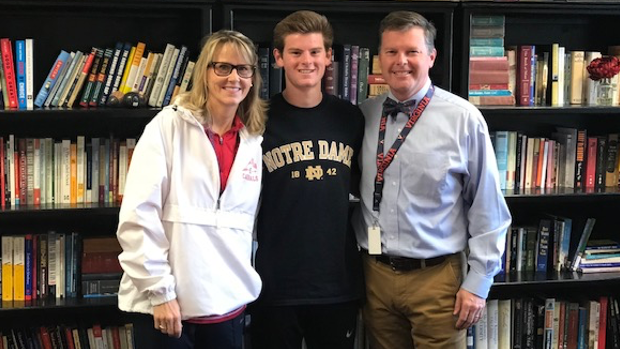 The last couple of months and especially in recent weeks, things have been kind of a whirlwind for Fort Worth Christian senior Carter Cheeseman.

When you consider he underwent a complete transition of moving halfway across the country and changing schools, then yes, his entire world has been a whirlwind lately.

Competition wise, things have been on the go and in transition as well with him getting accustomed to Texas runners, both in and outside of his Texas Association of Private and Parochial Schools (TAPPS) league. He has also traveled around the country last year in cross and track to get the best level of competition he could.

Today, Cheeseman announced his college commitment, adding a future chapter to his tour around the country. The University of Notre Dame was the winner in the Carter Cheeseman sweepstakes as he proudly announced this morning on TX.MileSplit's twitter.

"It's been a very neat process, I've really been blessed to experience a college atmosphere, the last few weeks and months have been pretty cool,"

The success of his 2017 season generated quite the recruiting buzz for Cheeseman. He was able to win a TAPPS state title in cross country, two on the track, and NXR South to name a few. He was one of the few athletes in the nation to qualify for both NXN and Foot Locker Nationals last season.

"It's been a very neat process, I've really been blessed to experience a college atmosphere, the last few weeks and months have been pretty cool," Cheeseman said. By the end of the summer, the process was narrowed down to five schools that he would visit and focus on: Belmont, Furman, Georgetown, Notre Dame, and Stanford.

With today's announcement, Cheeseman will join a highly touted Fighting Irish 2017 recruiting class that is currently enjoying success. The 2017 class of Matthew Carmody, Dylan Jacobs, Danny Kilrea, Zach Kreft, Jack McNabola, Amani Morrell, and Luke Phillips already has Notre Dame in a good position to make some big noise at the NCAA level. Add that with the development of Yared Nuguse from Notre Dame's 2016 recruiting class, it obviously made a big impression on Cheeseman not allowing him to pass up the Irish.

"One of the big motivations for me was what coach Carlson told me, he wants to take the program to new heights, he signed those guys last year and the fact that those guys bought in spoke a lot to me."

Now that his college choice is out of the way, Cheeseman can now press forward with continuing his 2018 cross country season. He can focus for another shot at NXN and Foot Locker Nationals and a pursuit for a national championship. He is off to a good start with his 14:50.70 5K win this past weekend at the Great American Cross Country Festival.