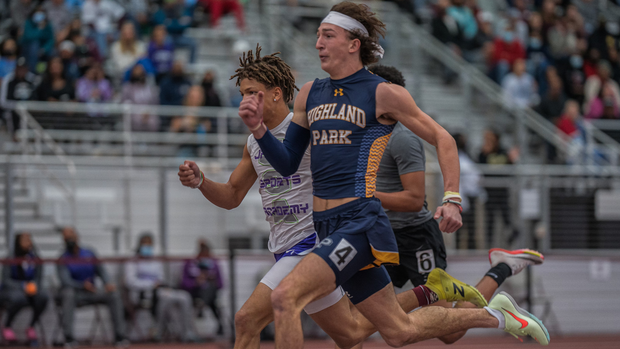 If you're a history buff, then when you hear the name John Rutledge you will probably initially think of one of the United States' founding fathers from the 1730s. However, Texas high school track and field has someone else who shares the same name.

This John Rutledge either already has or will eventually change the way you think of his name from now on. He has been known as the star wide receiver on perennial football powerhouse program Dallas Highland Park.

The six foot 160 pound Scott was a team captain and led the team in catches, receiving yards, receiving touchdowns, and he was the district Offensive MVP. His play helped Highland Park earn a Bi-District Championship this past season.

In addition to his football pedigree, Rutledge is also an excellent student (maintaining a 3.61 GPA), and after participating in track and field dating back to the seventh grade, he now has fully made the transition to being an all-in track and field athlete.

"I learned that I have lots of talent and can go far with it if I work hard enough."

Over the weekend, he competed in his first indoor track meet at the Texas A&M High School Indoor Classic saying, "it was pretty different running indoors. The slant of the track threw me off and also how tight the curves were." Nevertheless, he handled himself well along with the challenges of indoor track.

In his first race, the 200m prelims, he ran a 21.73 to win his heat, which check marked the first goal he set for himself, "my initial goal was to break 22.0," Rutledge admitted.

That qualified him for the finals, put him in the fastest finals section, and in perfect position to achieve his second goal. "Once I (broke 22.0) my next goal was to win." That's exactly what he did as he edged out Klein Forest sophomore and fellow football star Jelani Watkins in the 200m finals.

The win and the time of 21.47 currently ranks Rutledge US No. 1 in the indoor 200m event. This was possible thanks to his decision to run indoor track and get started earlier this year than ever before.

"The competition was great and really made me push myself," he said, but the push also came from within. With football season being over and his college future status being uncommitted, Rutledge took things into his own hands. He said, "in football, everyone has to do their job, track is a lot more about yourself." He began training for track as soon as he could sharing, "I took around two weeks off after football to help my body recover, then got straight into training."

After competing and completing four years of high school football, track season is all that's left for Rutledge as a prep athlete. However, he has the desire to continue as a student athlete in college, "I'm not committed anywhere, but I'd like to compete in track at the college level," he said. "I learned that I have lots of talent and can go far with it if I work hard enough."

With Rutledge, anything is possible, a college offer and even a Texas state championship. He finished fourth last season at the UIL 5A state championship in the 200m. With two seniors finishing ahead of him, this weekend's performance proves he could contend for the state title this year.