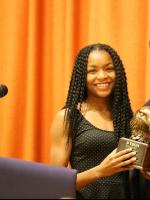 A Look At The New Yorkers Competing At The D1 NCAA Cham...
We've combed through the entries to pick out those from the Empire State, and have all the info you'll need to know....

A Post-Sweat Chat with Amanda Crawford...
Jojo caught up with the leader of the nation's fastest 4x200m before the Millrose Games last week...

Final Update: New York State Class Rankings...
MileSplit HQ - Wondering how you rank against your peers? How about those in the same grade as you? What about how next years rankings would look without the graduating seniors? We have all the answer...

Great 8 Things To Watch This Weekend At Mayor's Cup / A...
What To Watch Over The Weekend...