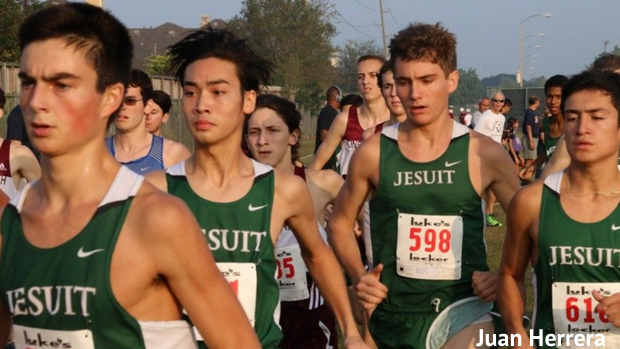 With championship season rolling around, it reminded me that we are seeing the end to what was a tumultuous season for many teams in parts of the state. Hurricane Harvey surprisingly brought a weekend of cancelled meets, but it then quickly turned into somethings bigger and more than a cancelled sporting event weekend.

This season, the district and regional meets are the ends to some cross country seasons that started in an  unusual manner. For most seniors in the effected areas, this isn't exactly the script they thought would play out for their last high school cross country experiences.

No doubt district and regionals are the last meets for individuals and teams year in and year out. However, this season, for some it seems like an end to something that just started.

This weekend, I saw some teams and athletes race for the first time this season and some possibly for the  last time.  Many of the kids i've come to know over the last four years or so.

I saw Reagan Kappel run what was possibly her last high school career race. Kappel who had a very successful career was supposed to enjoy a senior year that could possibly see her lead a very good Cinco Ranch squad to being one of the best in the state. Last season, Kappel was having her usual dominant cross country season, but at district got injured. No problem, things happen. Injuries are just a part of the sport. However, that is when things took a turn.

Beginning this season, Kappel and her team returned several experienced veterans who have qualified for state for the last several years as well as they accepted two very impactful freshmen. Hurricane Harvey drastically changed things. Parts of Katy, Texas were hit hard by floods, including the Cinco Ranch community. Girls on the Cinco Ranch team were directly affected. Senior Megan Hopper said, "It's been crazy, we had two weeks of no school or practices and three of our meets got cancelled." Not only did families on the team get displaced, but one team family actually temporarily housed three other families from the team. Kappel said, "Our whole community has come together, It's been fun to watch us all rally around together."

We couldn't be more proud of these young men and women answering the call for help in our community. You are setting an example for all! https://t.co/THNr7VFE37

Story: From all over, @KatyISDAthletic student-athletes step up in area's recovery of #Harvey: https://t.co/eE6cYXeyUO pic.twitter.com/mfw1K0iAkW

Many of the Katy schools in the district were effected by Harvey. However, the entire district galvanized their student-athletes to help when and where they could. Cross country athletes and others from Morton Ranch, Mayde Creek, Cinco Ranch, Taylor, and others served their schools, district, and communities.

Kappel finished the race this weekend, but she came off of the course with what looked like a significant injury. Could this be the last XC race of her high school career? Just two years ago, she was the UIL 6A individual runner-up and she also just committed to Oklahoma University to continue her career. As one of the nicest young ladies I have met, I hope to see her suit once again in a Cinco Ranch uniform.

Thank you to @strake_jesuit for all they do, a great group of volunteers!! Thank you so much!! pic.twitter.com/xc9fw17jH7

Houston Strake Jesuit seemed to have escaped without too much damage from Harvey. However, that didn't stop them from working.

The Jesuit family also got together and assisted their community. The surrounding ares of their school were also affected and the cross country and track student-athletes joined with the rest of the athletic department to help where they could.

Can't even begin to thank our community and local businesses for their help! I've been moved by everyone's generosity. https://t.co/VpergVQlZL

What may already be the end of the season for some and soon to come for others will definitely be one that they won't soon forget. Because of the devastation and destruction brought by Harvey, memories will last for a long time. What can't be lost in all of it are the characteristics and traits like the heroics, dedication, and service to their communities these young men and women demonstrated in a desperate time.

What a day for @strake_jesuit Basketball. AM workout, full school day & house clean-up for a teammate! :heart: this group #menforothers#teamfirst pic.twitter.com/NPffn3aQRa