1. Makenzie Hayward is on fire! 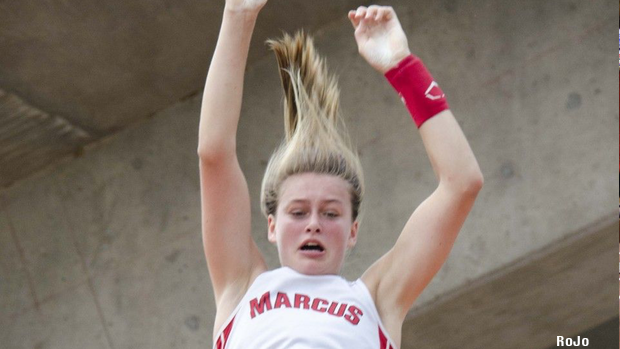 We wrote about Makenzie Hayward last week, well here we are again. She is still on a roll. This weekend, she participated at the Lovejoy Texas Express Pole Vault and High Jump meet and what she did was give us more of more. She went for a new indoor PR and U.S. #4  rank of 13-4 for the win.

Hayward is off to an amazing start and she is representing well for her state and her event. It will be fun to continue to watch the Marcus junior for the remainder of the season.

Fort Worth Paschal senior Gregory Sholars II had quite the meet at the Texas Tech Under Armour High School Classic. Sholars II had a moderate 60m prelim races in his terms with a 7.04, but his 21.59 200m prelim was outstanding and showed that he was warmed up and ready to go for the finals.

We were made aware that Plano senior Kennedy Blackmon was ready to drop some fast times. She did just that in the 200m and 400m prelims. Just like Hayward and Sholars II climbed the national rankings with their performances this weekend, so did Blackmon. She blazed Texas Tech's new track with her 24.21 and 54.90 for #3 and #6 on the national list. If she is already dropping big time marks like that indoors, just wait to see what she has in store outdoors.

Bailey Lear will run her first varsity race for Frisco Heritage next month, but before she does, she will have already been the fastest girl in the nation....twice. This weekend, she dropped a 53.89 in the 400m prelims for the reinforce her top spot nationally and but then she went 24.30 to show her speed in the 200m, good enough tor #7 in the nation.

Mansfield Lake Ridge junior Jasmine Moore isn't from another world, but she is trying to jump to another one. Moore set another class record and that seems to be a given with every season and every grade with her.  At Tech, she jumped an indoor PR 42-9.50 to take her season to the next level, she even admitted that she wants to be the best high school jumper ever. One thing for sure, she is building quite the resume.

We've got the fastest guys in the nation and that is no secret, but we have the fastest hurdlers as well. At Texas Tech many of them were there and we got to see them all go head to head mano y mano. All of the prelims and were splendid races as the guys all fought for a chance to get into the finals. The last finals spot was 8.65, in fact, just to get into the fastest finals heat it tool an 8th place time of 8.11!!!

El Paso Hanks sophomore Michael Abeyta is still running well. He had an amazing cross country season as he dropped some super fast times en route to his UIL 5A state meet second place finish. Abeyta is back at it as he showed at the Texas Tech Under Armour High School Classic. Abeyta took second in the 800m with a 1:57.65 run only to be beat by New Mexico state champion Harrison Smith III.