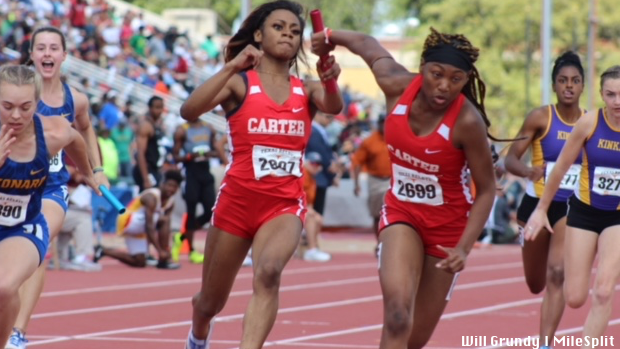 The race was all in the middle of the track as Dallas Carter had their all-world sprinter Sha'Carri Richardson on second leg. Richardson put Carter in a firm and solidified position for the win and the last two legs had to put in work and drive to the finish line.

That task was easier to say than to do. With a bunch of state champions in the race having solid and elite caliber legs on anchor the fire was coming.

No disrespect to anybody, but Carter is the defending state champ until they are taken down. They drove to the finish line for the win in 47.40 just ahead of Kinkaid's 47.90 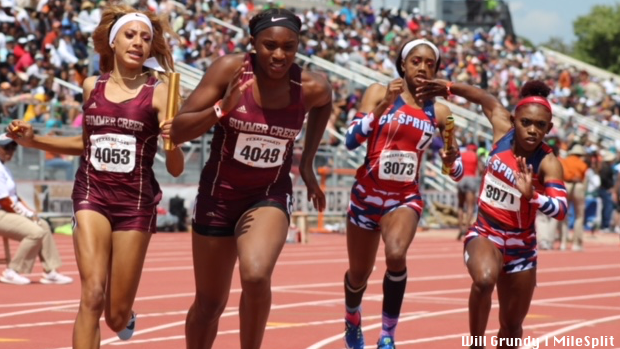 In the Div II girls, it was again the same ole same ole. The DeSoto girls came in with the fastest time out of this morning's prelims.

DeSoto also came in with the fastest time in the nation from the Jesuit Sheaner Relays at 45.80. Even with that, the teams in that heat didn't give them anything easy, they would have to hold off one of the most successful sprint programs nationally over the last 5-6 years Cypress Springs. Can't fail to mention UIL 5A powers Mansfield Lake Ridge and McKinney North were also in the race.

However, DeSoto girls were just too good on this day just as they have been for most of the year. They would cover the University of Texas track in 46.07 ahead of Cy Springs' 46.44 second place time. 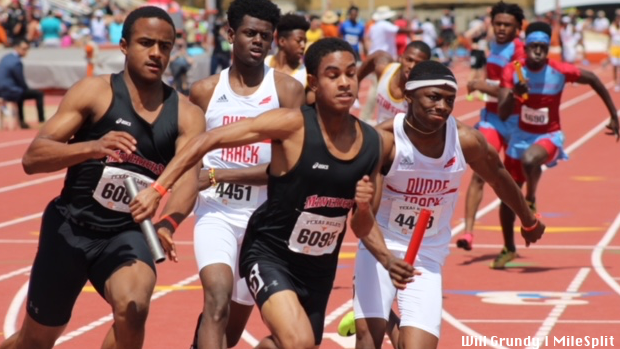 On the boys side, Dallas Bishop Dunne has run and won against UIL competition all season and they were not in the mood of losing now. Bishop Dunne is on a mission to break more TAPPS records and collect more state title including the Div 1 4x100 relay. Today, was much of the same from the 2018 season as they would motor home in 41.12.

Two Houston area private schools would follow up in second and third as Houston St. Johns and Bellaire Episcopal crossed the finish line in 41.92 and 42.43.

The Boys Div II 4x400 is where things would change. The race had many of the usual suspects in the race with the US #3 DeSoto, Cedar Hill who ran 40.1 last year, Mansfield Legacy, and Lancaster. 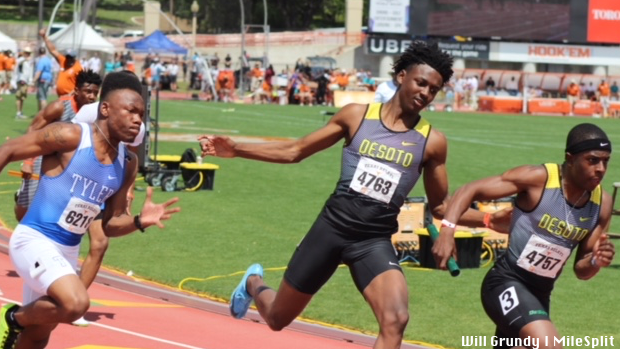 Lane five had the noticeable missing piece of the #3 The Woodlands with a DNS.

That led to the new blood of Katy Seven Lakes to come in and enter the conversation. DeSoto and Seven Lakes were in the premiere lanes and they did not disappoint. It all came down to the anchor leg and the Seven Lakes anchor leg would win the dip at the line contest. Seven Lakes' winning time was 40.88 good for their second 40.x race in as many weeks. DeSoto would finish second with a 41.02.