This had to be one of the best races of the weekend.

In a race comprised of some of the fastest girls in one race outside of the state meet, the possibilities of this race did not let down. We knew coming off of the District 5-6 Area Meet 6A Area meet that there were some girls who could absolutely fly. Adding a couple of more top girls in the state, this was destined to be an epic race.

Then you have the special category type of 800m runner like the Isabel Van Camp (Keller) and Bianca Carroccio (Plano) type of runners who just go hard from the beginning despite how uncomfortable the pace might feel.

That is exactly what they did in the Region 2-6A finals. Both Van Camp and Carroccio took the race out in a good and strong 31 seconds at the 200m. The two continued to lead the race through the 400m split in 64 seconds, which is a significantly fast pace for most girls in the race. It forced them into making the decision on whether to go with the two stud runners or sit back and wait.

As Van Camp and Carroccio continued to lead through the 600m, only a few girls were still in contact. Hebron freshman Keaton Morrison and Flower Mound junior Anastaysia Davis have been enjoying surprising good track seasons and ran this race with the confidence they were exuding from their area meet. However, as the 700m mark arrived, it was Carroccio in the lead with Van Camp close behind. 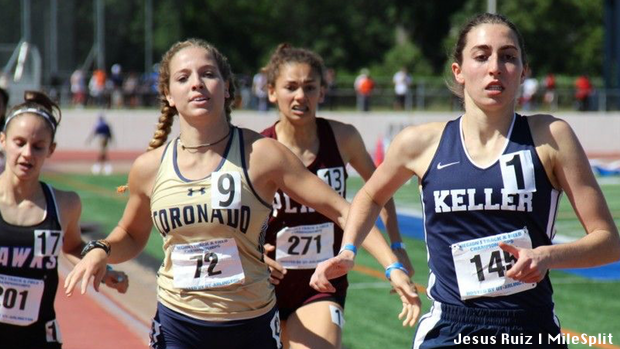 What none of the four leaders knew was that El Paso Coronado junior Jennelle Jaeger-Darakjy was determined to earn herself a return trip to the state meet.
The El Paso star ran the exact opposite race than the one Carroccio and Van Camp did. It was a more conservative first lap with approximate splits of 34 and 1:07. That put her a good 15-20 meters behind the leaders. In fact, for much of the second lap, she wasn't even in video for half of the second lap, and by her own admission, "I was pretty far back on that last lap."
For the last several weeks, El Paso area runners have been running in 30 mph winds and Jaeger-Darakjy ran much of those races uncontested.
Yesterday's race was a polar opposite to the races she is accustomed to. She found herself in a big deficit and without the difficult head winds. The lack of wind resistance could have been perfect for the Jaeger-Darakjy's situation.
She put on a big time second lap push to get her in position for a final 100m kick.
With 100m to go, It was Carroccio, Van Camp, and Jaeger-Darakjy running all out with what they had left in the tank. Morrisson and Davis also made a big last minute push towards the finish line.
In the end, it would be Van Camp crossing the line first (2:11.0) and Darakjy's big time last lap gave her a (67.x/63.x) negative split for second place (2:11.20) as both girls will represent Region 2-6A at the state meet for the second year in a row.
Morrison would kick in the end narrowly edging out the slightly fading Carroccio for third place in 2:11.57 to 2:11.65 as she would get the 6A wild card spot for the 6A 800m. Davis would finish in fifth in 2:13.70 meaning two girls with elite times would see their seasons come to an unfortunate end.
Tweets by TXMileSplit