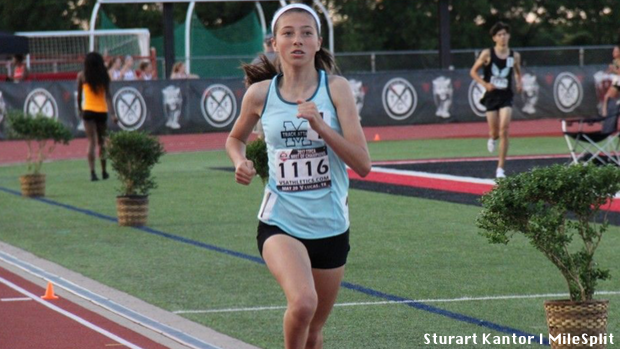 The Brooks PR is one of the many national meets that the top high school athlete get invited to for an all out battle to see who is the best in their events.

Texas sent a large number of athletes to Seattle, Washington to challenge the rest of the best and fared very well.

In the girls 2 mile, McKinney North sophomore London Culbreath who had already ran a national level 1 mile at the adidas Boost Boston Games for a 4:43.41 PR this post season jumped up to the 2 mile at Brooks. Culbreath competed very well running with five other girls for six and half laps. The last 600m is where Culbreath fell off the pace a little, but not before she crossed the line in 6th place in a new 10:03.29 PR.

In the boys 2 mile, Fort Worth Christian junior Carter Cheeseman once again proved that he will search out the best of the best and line it up with them.

What a great @brooksrunning event today!!! Super proud of @LondonCulbreath for getting another PR today in the 2 mi. 10:03 ~ I sure love my job and these nuggets! pic.twitter.com/kCaRA0Un5Q

Cheeseman, who has probably raced the least in the last month or so out of anybody nationally has shown quite the ability to stay sharp and race ready. He recently PRed in the 1 mile at the St. Louis Festival of Miles with a 4:12.20 before switching gears for the  2mile.

Cheeseman proved he was ready to run a quality race as he even led the race in the early goings for a moment. He would remain in contact with the leaders for the majority of the race until the last 450m or so. Cheeseman would still put together another quality race as he would run 8:57.33 for his second sub 9:00 2 mile of his career just behind his 8:54.06 from earlier this season at the Arcadia Invitational.

The 2018 season for the Texas 800m event has been a wild and exciting ride. Two girls athletes and one boys athlete represented Texas at Brooks.

The UIL 5A state champion freshman Bailey Goggans from Marble Falls and UIL 6A state champion sophomore Wonders Oguejiofor from Cypress Springs both went with PRs on their minds.

The race went out pretty respectable as the the Texas girls who have made a name for themselves as front runners were able to run a comfortable pace without leading. That could have been a blessing and a curse. The pace was approximately 61 at the 400m split, which was just about perfect for Goggans and Oguejiofor both who are 55.x  quartermilers.

With ten or more girls in tight quarters throughout the race, something that neither of the Texas girls are used to might have caused an unknown race variable for the girls who are used to running clear and free. However, both girls who are young will continue to be top national girls were able to get valuable experience on the national level.

UIL1A star and Texas distance legend, Jake Merrell of Turkey Valley finished his career as one of the fastest and most decorated high school runners in UIL history.

He was looking to add a Brooks PR title to go with his eight individual state titles and two team state titles.

Much like the girls race, Merrell would have to deal with a heavily populated race in a small space. Merrell who is also used to running clear and free was totally unable to do so from the gun. He captured in the pack and unable to comfortably open up his stride.

The 400m split was 56.5, way slower to that that Merrell is accustomed to which further complicated things. He did finally break out on the backstretch, but a race with the quality level of athletes weren't too far behind. With 100m left to go, all runners were in the race. Merrell finished ninth overall in 1:53.23.

The 400m was another strong event in Texas in 2018. Frisco Heritage senior Bailey Lear has been the top Texan all year long and she led the way to Brooks. She was the defending Brooks PR champion coming into the meet as well as the UIL 5A state champion.

Lear was in lane 6 and got out to an unbelievable start. She burned the curve and blazed through the backstretch as she has done all season long. The third 100 was where she let the runners back in the race. All three runners that beat her were on her inside and were able to ride off of Lear's pace. Coming off of the curve, a group of runners were able to get back in the race and put a few meters on Lear as she was unable to defend her 2017 title.

Lear finished in fourth overall with a 54.01, one of her slowest times of the season that saw one of the best overall 400m seasons of Texas history and still finish #4 in the nation without her best race.

The boys 800m saw a hefty hand full of Texas flavor. A pair of 46 quarter milers and a 47 quarter miler went to Brooks for the boys title just to fall a little short, but not for a lack of effort.

UIl 4A state champ, LaKyron Mays from Dallas Carter, Matthew Boling from Houston Strake Jesuit, and Nathaniel McRae from Conroe Oak Ridge were all in the boys 400m field.

None of the guys had their best races, but Mays and Boling were able to put together solid races by overcoming not so fast starts. Mays and Boling ran well on the backstretch as well as on the third 100m to put themselves in good position in the final 100m.

The girls 100m race was about as atypical as it comes for Sha'Carri Richardson. The Dallas Carter grad is usually the best starter of them all, but had a strange and un Sha'Carri like start ever. Richardson who is one of the best technicians and best form runners of all-time was unable to execute two or three very important steps.

On her fourth and fifth steps, Richardson had a stumble or what looked like her legs almost gave out causing her to immediately fall behind as the other runners finished through their push offs and drive phases. Demonstrating unbelievable composure and patience, Richardson would execute a sound mind to still attempt to go back through her drive phase and transition. She made up ground, but was unable to make it all up. She finished fourth overall with a 12.04, which was one of the slowest times of her career.

Also in the race was Cypress Ranch junior Kailei Collins. Collins made her second consecutive Brooks PR appearance. She also showed the ability to overcome an uncharacteristically slow time for her standards with her 11.92 to place third.

Mansfield Legacy grad Jais Smith was making his third national level post seasons race. Smith participated in both the adidas Boost Boston Games, Great Southwest Classic, and now Brooks was able to run his way to a third place finish with a 10.65.

Kattian Ealy-Pulido, and De'vion Wilson, Eric Edwards were all coming into the meet from different paths. Pulido was able to have a great 2018 season which included a UIL 6A state title in the 100H. Wilson and Edwards were both unable to have the expected finishes they wanted for their seasons. Wilson had an eligibility issue and Edwards had an injury issue with a hamstring.

Pulido was looking to run a fast time and possibly get a national title. Wilson, perhaps was wanting to remind everyone of his elite capabilities and Edwards, who already has an international title was looking for far less in this race. He purely wanted to compete the best he could and come away healthy after the race.

In the girls 100H race, Pulido had an unusual start. From the gun she is normally a fast starter, but it wasn't there this day. To make things worse, she hit a hurdle midway through the race and was just unable to get in a rhythm from there. She jogged through the line in what may be a disappointing ending to the race that was just a part of an absolute outstanding season for Pulido.

A true blessing to be able to finish my first (and last) race of the season. I pulled my hamstring (again) but I thank everyone who supported me throughout my high school career and the journey WILL continue at The University of Oregon pic.twitter.com/x6vEvzpGv6

Wilson and Edwards, on the other hand had pretty good races for two guys who haven't competed significantly in some time.

Both guys battled in the race all of the way to the end in contention for the win. Wilson hit the last hurdle with his lead leg and that cost him a shot at the win pushing him back to a third place finish. Edwards, who was right beside Wilson was able to roll off of the last hurdle and dash to the finish to capitalize off of Wilson's stumble for a second place finish.