Yesterday was a social media viral type of day to have a cross country meet. The rain, mud, and river like conditions in the middle of the meet provided moments that were captured and memories that will be kept for a lifetime.

However, the meet was intended for some of the top individuals and teams and was to be another test to see where they stand at this point of the season. It was also the anticipated season opener for two of the top runners in Texas. The weather prohibited the fast meet we were expecting to see, but it wasn't without it's benefits.

Several of the teams and individuals entered have aspirations to qualify for the two national championship meets in NXN and Foot Locker. NXN is well known for it's weather and course challenges and has been quite the obstacle for some South Region athletes and teams to adapt to.

Leave it up to the Southlake Carroll Inv. to provide that opportunity to prepare for NXN. The conditions and the cold rain, wet and muddy course conditions, and elite talent did exactly that. 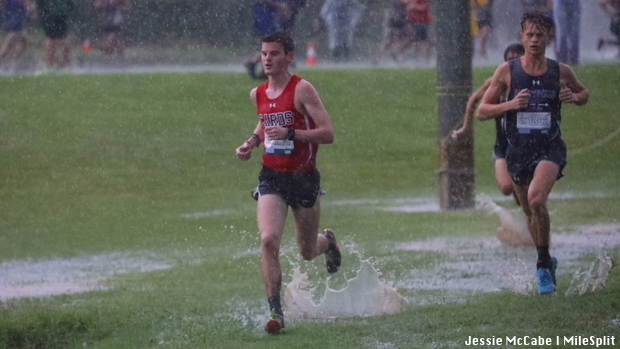 The Elite boys winner and Arkansas native Camren Fischer said, "It couldn't have been worse, honestly," and runner-up, Carter Cheeseman said, "It was rough, I guess it's good preparation for me to make it to Nike, that's the goal, so this is a good prep for that." Cheesman for one would know. Last year, both Fischer and Cheeseman were NXN individual qualifiers."It was all about the toughness at this point and who was going to grit it out on this day," Cheeseman added.

Fischer and his Fayetteville, Arkansas team arrived to the hot and humid North Texas weather on Friday for a shocker. The rain helped Fayetteville adapt, "It kinda helped us out, just yesterday my team came to jog the course it was like 90 degrees and we were sweating a ton," said Fischer. "It was like Holy Cow this is going to be hot, but, when we come out here the rain really cooled us off."

This was the season opener for both Cheeseman and McKinney North Junior and two time UIL 5A cross country champion London Culbreath. What was expected to be blazing fast times ended up being anything but that. Since arriving to high school, Culbreath has only run over 18 minutes four times in her over 20 career 5K races. Yesterday, she dropped an 18:05, "Today, time did not matter at all," Culbreath said.

Throughout all of the competition and the added weather related challenges to running, there was still a lot of fun that was had by all. El Paso Hanks junior Michael Abeyta, third place finisher in the Elite Boys race said it was tough and competitive, but he also enjoyed the race. "I thought it was fun with all the mud over there." Culbreath also added, "It was kinda fun, I enjoyed it. Besides Nike, I don't think I've ever races a real muddy wet course like that before, it was really fun."

So, if you thought the rain totally messed up the plans for a fast and elite race and was a waste, think again. Yes, I know athletes came in from as far as El Paso and Arkansas and the season openers for some of our elite runners didn't go as planned. However, this just might have been the one time to get this type of race for the South Region athletes who aspire to run at NXN. The talent was assembled, but so was the footing, conditions, and other factors you can't typically simulate for NXN preparation.