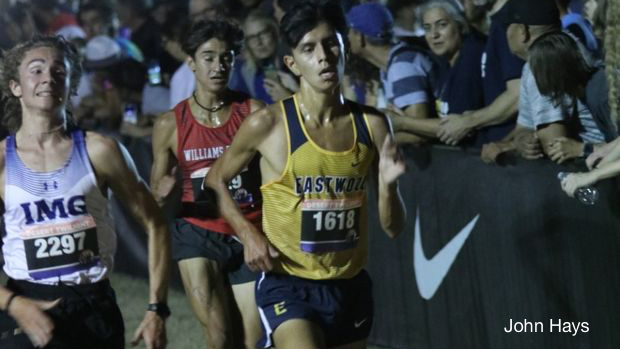 This Team Tuesday is one that will not surprise you on one regard and then again it one selection might astonish you. We have a boys team that has been towards becoming what they want to be by the end of the year. There is another team that has been impressive all season long so far and looks to keep getting better. The last team is one that has also been doing well all season long on a lower level, but in their shot at a slightly higher level at a big meet, they did what they continued to do so far this season....win.

The Troopers have etched themselves in the minds of Texas cross country fans as one of the best re-occurring programs in the state. They did this by continually getting better and faster as a class of runners graduates while keeping their momentum.

The Eastwood boys program has won a state championship, qualified for Team Nationals, and then continued to be relevant and in contention.

This year, they are back in the conversation of one of the best teams in the state and they are fighting to be one of the best nationally. Two weeks ago, at the California Woodbridge Cross Country Classic, Eastwood finished fifth in the team race behind MileSplit 50 US No. 1 Newbury Park (CA), US No. 11 Great Oak (CA), US No. 14 Desert Vista (AZ), and US No. 25 Southlake Carroll. Coach McLain's team ran a 15:06 team average and a 44 second split in the 3 mile race.

This weekend at the Desert Twilight XC Festival in Arizona, Eastwood was second. They used a 15:56 team average and a 41 second split in the 5,000m course to finish only behind the US No. 12 team Niwot (CO) and ahead of US No. 14 Desert Vista.

The Lady Leopards have consistently made the list this season. Reason been is that they're competing in high level meets all season long and they've been doing it at a high level. It's crazy to believe that they seem to be getting better and better at this cross country thing, but they are.

Coach Littlefield is pushing all of the right buttons and the girls are executing without missing a beat. That's evident with their MileSplit 50 US. No.9 ranking.

That's not to say this season hasn't been challenging for the team. For various reasons, they've had to plug in various runners to fill the top seven spots and it's working without missing a beat.

Lovejoy won the Hoka One McNeil Invitational last Saturday by using a 18:22 team average and a 1:16 split and by putting their five scorers in front of everyone else's number three runners (except for Prosper - 4).

Lovejoy keeps making our list because they keep getting better. Steady they go as a program; we wanted to focus on another team in this, but they just won't let us leave them out. The Tompkins program has been consistent in both genders and they've both frequently qualified for the UIL 6A state cross country meet.

However, this isn't about either of their varsity squads. This isn't even about their JV boys teams.

How well? They are undefeated this season in the freshman races and they recently averaged a 11:30 team average for two miles at the Cy Fair ISD meet two weeks ago. The team average was actually 11:07.66  through four runners with a 23 second 1-4 split.

This weekend at the Hoka One McNeil Inv, Coach Yarrow put his freshman boys face to face with their biggest challenge by entering them in the JV Boys race and in their first 5K of their careers.

The boys responded well by winning the race with only 17 points in a race with 270 runners in it. Tompkins went 1-4 and added the eighth, ninth, and 12th place individual finishers. A 17:35 team average and a 1:03 split in their biggest and longest event and they deserve props!