Amy Pitzel coached track and field and cross country for 16 years. Her most recent stint was at Katy Tompkins in Katy ISD. She led the Tompkins girls to three consecutive UIL 6A state meet team qualifications in 2017, 2018, and 2019 with a 2017 Region 3-6A team championship and runner-up finishes in 2018 and 2019. Pitzel was named Gulf Coast Scholastic Track and Field Coaches Association Coach of the Year in 2017.
This season, she will pick Texas high school coaches and athletes throughout the season to discuss a variety of topics.

The Humble Atascocita boys have been taking the program to the next level. Coach Todd Symons and the Eagles are enjoying success very few teams experience.

The last two years, they came ever-so-close to getting on the awards podium as a team for the first time in school history. Kingwood girls and boys are the only representatives from Humble ISD to win UIL cross country titles.

Although success comes with some high times, it can also bring some low moments. Atascocita has had to taste the sweet along with the bitter. Last season, not only did Atascocita miss by one position, they missed by one point. To come that close would be a tough pill for anyone to swallow. However, for Symons' program, it was even tougher to digest when they were initially told they tied for third place with El Paso Eastwood for third behind Southlake Carroll and The Woodlands. 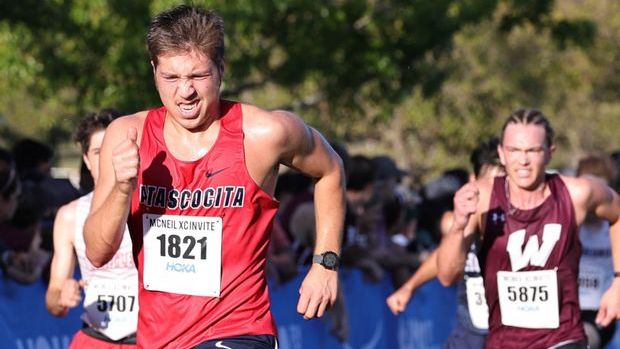 The Eagles weren't given an explanation good enough for them to understand how and why there was a change in the scoring after they were posted. Symons had to scrape up the emotions of not only his athletes, but also of parents, supporters, and his own coaching staff. The emotions that were so high due to elation of accomplishment, only to adversely and abruptly be driven so low without comprehension of how.

Somehow, he got his boys back in saddle emotionally, mentally, and physically for the 2022 cross country season. Despite the attrition of graduation and the blow dealt last year, he has continued to do the things he knows how to do the best; he continued to teach, encourage, and coach young people.

Atascocita entered the season ranked No. 3 in the Cross Country Coaches Association of Texas (CCCAT) UIL 6A team poll and are currently ranked No. 6. They finished third at the Hoka/McNeil Inv. behind Coppell and Austin Vandegrift, two other ranked UIL 6A teams.

Listen to Coach Symons and some of his seniors talk about their journey over the years and how they handled last season to approach the current 2022 cross country season.