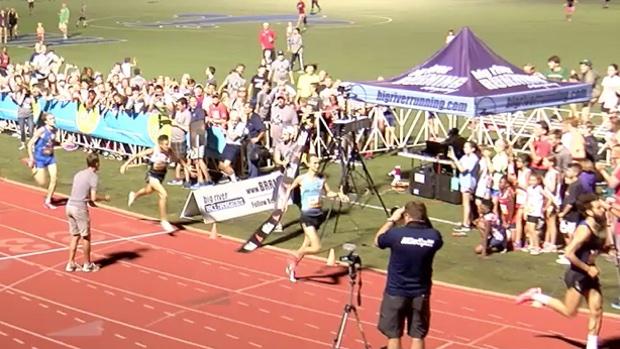 Reed Brown crosses the line with with a 3:59.30 mile performance becoming the first Texan to break 4:00

We knew it would happen, it was just a matter when and who would do it first. REED BROWN and SAM WORLEY have been linked together as two of Texas' leaders in the boys distance events for the last two years. In the cross country post season, the two guys went on a national winning spree. The two guys led Texas distance runners as they tore up the national scene ending with top All-American performances at Nike Cross Nationals. Then Worley won the Foot Locker South Regional and Brown won the Foot Locker Championship.

As track season rolled around, Brown ran early and fast. To kick things off, what has been his routine, Brown ran at Texas A&M in January. The first weekend of the year, he ran a solo, but very fast 4:11.16. We knew then, this season was going to be special. Brown followed that performance up a month later with another pretty much solo indoor mile with a 4:06.40 run at the Dunamis Sports Group Prep Classic. To end his indoor season, Brown finished with another 4:06.74 to take second at the New Balance Nationals Indoor Championships.

In the outdoor season, we saw Brown and Worley both run extremely fast chasing the 4:00 mile barrier. At Texas Relays, both Texas high schoolers ran in the Jerry Thompson Mile with the collegiate/professional invitational runners. Worley won the entire race with a 4:00.61 and Brown dropped a 4:03.23. Both guys set the nation on fire with those performances, but they were both so close but the 4:00 barrier was still hanging over the Lone Star State's head.

At the state meet, Brown defended his 3200m title with a 8:58.02 win and Worley won his first 800m state title with a personal best of 1:48.25. For the 1600m, the two guys faced off for the last time in a UIL event. With the string of races and times the guys were able to put together, there were hopes of seeing a sub 4:00 1600m. The race did not have the necessary second and third laps for the sub 4:00 race, but both guys closed in a whopping 55.x final lap and leaving the fans with the usual Brown/Worley exciting finish as Worley finished in 4:02.30 and Brown in 4:02.49.

With their UIL careers over, we were left to wait for post season attempts for both Brown and Worley.

Reed Brown, made sure we didn't have to wait too long. In his first race since the UIL state meet, Brown took at it in the invitational race at the Festival of Miles in St. Louis, MO. At the start of the race, Brown was back in the pack mixing it up with the large group. Brown eventually moved up in the pack with very honest 60.x laps. On the last lap, we saw the usual and classic Reed Brown finish. Brown motored a 56.8 split on the last lap. With official splits of 61.54 - 60.88 - 60.08 - 56.8, Brown was able to become the first Texas miler to break the 4:00 barrier with his 3:59.30.

Being the #1 Texan all-time, Brown is now on the top 10 all-time list of high school milers. Brown is the #4 all-time miler in U.S. history.