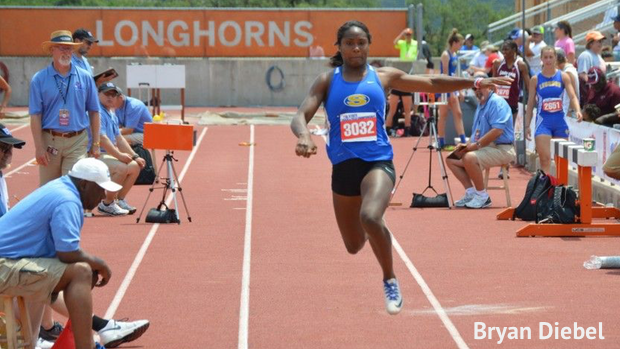 We are putting a wrap on the 2017 track and field season by announcing our end of the year awards. The girls field events were competitive with names like Zada Swoopes in the throws, Colleeen Clancy in the pole vault, and Jasmine Moore in the triple jump, but it was Sunnyvale's  Caira Pettway who was voted Girls Field Event Athlete of the Year award.
Just like past seasons, the public got to vote for the AOY. In the girls field event, 65,703 votes were tallied and Pettway was able to account for 43.41% of the vote with 28,519 total votes.
Pettway put together a very good school season by going undefeated all of the way until the Region 2-3A meet. Pettway was on a title defense the entire season fending off competitors trying to knock her off the top of the 3A long jump totem pole. She was able to bounce back weeks lated at the 2017 UIL 3A state track and field meet and defend her title and doing so with a personal best 19-4.5.
That wasn't all that Pettway accomplished this season. In 2017, she picked up a new event. Pettway and the Sunnvale staff decided to put her in the triple jump. She jumped her way to a 38-5 personal best along with several other 38 foot jumps. Qualifying for the state meet was just the beginning for her as she would come away with the 3A triple jump bronze.
Equally as impressive as her accolades in the jumps, Pettway is an accomplished sprinter. She placed second in the 100m as a sophomore, won the title as a junior and after competing in two jumping events was able to add a third place finish in 2017.
Related Links:
Caira Pettway Athlete Profile
Texas Girls Track and Field Leaderboard
Tweets by TXMileSplit