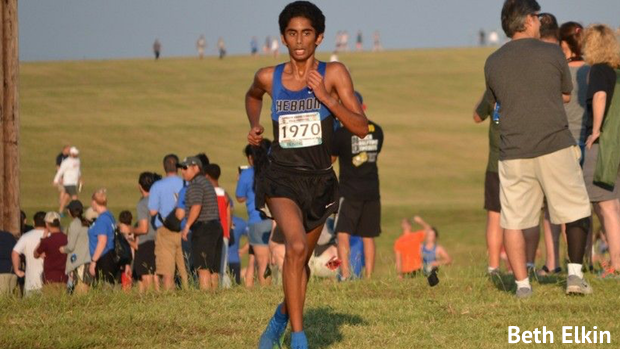 The 2017 Lovejoy XC Fall Festival was perhaps the most important meet of the year prior to the state meet for 5A boys and 5A girls. Not only was it big for 5A, but there were some big time teams entered in the meet all around.

The first race up was the Elite Girls race. Individually, there were definitely some big time Dallas area stars in the race. Carrie Fish was able to take control of this race after the first 400 of the race. Chasing Fish was a boat load of very capable runners. Freshman Harli Woolsey of Burleson Centennial led the chase group along with Jordan Mathis of Austin Vandegrift and Madison Acosta from The Colony.

Team wise, the race was indeed on, and the outcomes were much anticipated. The victory by Fish and the ninth place finish by sophomore teammate Amelia Jauregui were big for their Frisco Liberty team. Liberty was able to get second place as a team. Getting second was still big for Liberty as the only team to beat them was a 6A team as they came in with a 19:16 team average for 135 points. The difference wasn't very big though as they narrowly bested other top 5A teams like Burleson Centennial. The Centennial squad has been running very well over the course of the season and scored 141 points, just six points behind Liberty. Centennial's hot running this weekend was on the legs of of their diaper dandy Woolsey, but the whole squad ran well as they ran for a 19:17 team average just one second behind Liberty.

With other 5A power teams like Highland Park, Prosper, Lovejoy, Wakeland, and Grapevine all in the meet, the difference in the scores mostly came down the the positioning of the 4th and 5th runners, which is the best way to have an entertaining cross country race.

Howerver, the most impressive team performance came from the ladies of Marcus. Marcus was running without their #1 runner Quinn Owen who was on a recruiting visit. No Owen, no problem on this day as the girls were still able to come away with the win. Marcus went for 96 total points and an 19:10 team average.

In the 4A and under race, things were just as exciting. Huffman-Hargrave, the 2016 4A state qualifiers came through with a solid performance. Getting the individual win from senior Kaytlyn Kuta always helps, but they threw their top six runners in the overall top 15, that's just good old fashioned cross country running. Not too far behind Huffman-Hargrave was last year's 4A team runner-up Kaufman. This year's Kaufman team is a mostly different squad from the last couple of years. Graduation hit them hard last year, but that's no problem as they performed well in the elite race on the legs of some freshmen and their second seven runners came in second behind Huffman-Hargrave in the 4A and under race. Anna and Melissa were also in the mix of things in this race.

On the boys side, the host Lovejoy had quite the challenge ahead of them in winning their own meet. They invited some big time programs and the meet definitely did not let down. As the defending 5A state champions, Lovejoy was indeed able to get the team as they won with a 130 point total and they dropped a 16:06 team average. What was more impressive for Lovejoy and the big reason they have to be feeling good about another state title was their 24 second 1-5 split.

Finishing in second was Lewisville Hebron who was led by their All-State prospect Adam Dayani who won in 15:34.19. Hebron was followed by Wylie and Plano West who are other 6A programs that have been running well this season.

On the 5A boys side, the teams looking to knock off the defending champs Lovejoy were last year's runners-up Donna North, Grapevine, and Frisco Wakeland. Donna North and Grapevine were just a little ways behind Lovejoy on this day, but boy did they have a close one between each other. Overall, in this race, Donna North finished in 5th place and Grapevine was 6th as the were only separated by one point with the 244-245 score. The team averages were also only separated by one second as well with Donna North's 16:23 to Grapevine's 16:24.