Region II went down Monday in Grand Prairie, Texas. This is one of the more peculiar regions because it covers several of the state's metropolitan areas.

The 1A girls team race was a close one between the four qualifying teams. Roby placed two runners in the top ten to help them to the title with 109 points. After that, O'Donnell earned their way back to the state meet by scoring 120 points. Six total points would separate third through fifth place. Garden City and Clyde Eula would edge Ira by scoring 128 and 132 points to Ira's 134.

Individually, Rotan sophomore Shailyn Kendrick would win by over 30 seconds with her time of 12:30.60.

Comstock boys dominated the meet by only scoring 48 points. They did so by placing three runners in the top ten and almost had a fourth who placed 11th. Sanderson made a race of things by only scoring 69 points.

The Seymour girls took the Region I-2A title by scoring 73 points. Seymour ran to a 12:53 team average as they were the only team to average under 13:00. They were followed by Valley View who scored 117 points followed by Lindsay (125), and Hamilton (145).
Valley View sophomore won the individual title as she was the only runner to crack the 12:00 barrier with her 11:52.89.
Boys

On Monday, Valley View captured the team title by placing their top three in the top ten and then putting their other two scoring runners in the top twenty. They scored 47 points and went for an 18:11 average for the 5K course. Bland also joined Valley View in scoring less than 100 points (78) followed by Seymour (108) and Poolville (120).
Individually, Valley View's top two scorers Luis Cardial and Houston Tipps crossing the line before anyone else in first and second.

Eustace is the 2016 3A runner-up at the state meet, so they are no strangers to fast running and winning titles. They were in for a good team battle with Pilot Point, but they were able to come away with the win as they dropped both their #4 and 5 runners ahead of Pilot Point's #4. They took the title with a 78 to 91 victory.

Individually, White Oak Senior Cryslan Tucker was able to take the victory by a 15 second margin over the second place finisher.

On the boys side, Pilot Point and Eustace switched places from the girls standings. Neither programs are unfamiliar teams at the state meet, so coming into the race both teams clearly expected to qualify and perhaps both expected the win. Pilot Point used their strong front runners to go 1, 3, and 4 and Eustace was never able to catch up from there. In fact, Eustace had to do it's best to hold of a strong charge from Whitesboro. Pilot Point had the low score with 41 followed by Eustace with 81, followed by Whitesobor's 84, and Commerce's 178.

Individually, Pilot's Points' top runners led the charge as two of their runners crossed the line under 17:00 minutes. Connor Walker of Pilot Point and Michael Urbina of Whitesboro ran a 16:19.20 and 16:19.86 race that was full of drama at the end.

This was the kind of cross country meet championship season is supposed to bring the fans. The race was fast and you had to count during the race to keep up with the winner and qualifiers. Six girls ran under twelve minutes in this race and six other girls were at 12:15 and under, so it was a good and hard pace. The top three teams took turns as their runners crossed the line almost like a pattern. By the time things were done and accounted for, the 2016 UIL 4A runner-ups Kaufman had won the regional title (66) followed by Decatur who was only 11 points behind (77), Gilmer scored under 100 (96), and Kilgore earned the fourth and final qualifying spot (174).

Individually, the six girls under twelve minutes as Kilgore's Zoe Craven took the victory with her 11:49,89. The top ten included three freshmen and three other girls were only sophomores, meaning the future of the region is in good hands and will be tightly contested over the next several years. 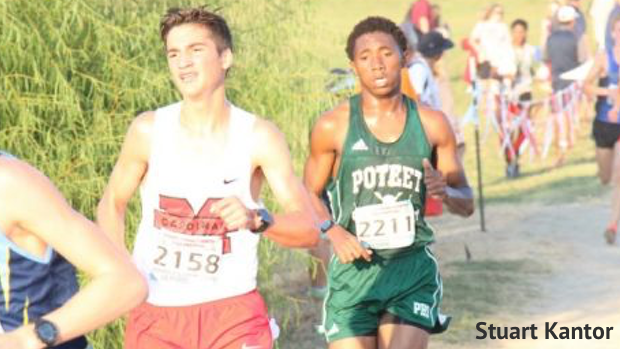 This was perhaps the toughest 4A region in the state. Going into the meet, it was no secret that with only four qualifying spots for state that there were going to be two or three of the state's best 4A schools that would be left at home. There was the #3, 4 & 5 ranked 4A teams in the state along with #10, 16, and 19 all trying to get to state.
What could not be overlooked was #4 Decatur would not have their top two runners score for them this day. Alan Rangel and Triston Read who could have both been top 5 finishers in the race ended up being Decatur's #6 and 7 runners on the day. Rangel who has a 16:06.98 PR and usually the #1 guy for Decatur finished as their #7 and 166 in the entire race with a 21:02 as he beat only 10 people. Read who is usually Decatur's #2 finished #6 on the team with his 35th overall finish and 17:17.89, over 45 seconds slower than his average.
As something clearly went wrong for Decatur, other teams would have to do their best to ensure they captured a qualifying spot. Melissa has been running well all season and was looking to return to state and improve on their season would battle Kaufman who was also looking to get back to state and capitalize on their top five finish from 2016. In the end, it was Melissa winning the regional title (62), but the remaining qualifying spots came down to the wire as Center secured second (105), Kaufman finished third (110), and Bridgeport (113) narrowly grabbed the last qualifying spot over Decatur by three points (116).
Individually, Kaufman distance star Christian Rivera is looking to improve on his outstanding freshman season when he placed 9th at the state cross country meet as well as fourth in both the 1600m and 3200m at the state track and field meet. Rivera would have to hold off Melissa's star freshman as Judson Greer, Texas' top freshman would give him a challenge. Rivera and his experience would prevail over the new comer as he won the race by ten seconds over Greer 15:49 to 15:59.

Just as the 4A races were exciting and contained some of the best teams in the state, so was the case for the 5A races. Literally the best 5A teams not named Canyon Randall or Canyon were in this race. This race did not disappoint and in fact, makes the anticipation for an awesome 5A race even more exciting! Highland Park was able to walk away from this all out war of a race with the win (87). They narrowly outscored second place by seven points. The second place finishing team came down to the sixty runner as Frisco Wakeland and Burleson Centennial tied (94). Wakeland won the deciding measure as their #6 outplaced Centennial's #6 28-72. If you think that was close, Frisco Liberty was only one point behind (95) for the fourth qualifying spot proving how highly contested state is going to be.

Individually, All-American London Culbreath was able to add another victory to her list of accomplishments as she is just now revving up her engines for this part of the season. Culbreath has methodically measured the season to be able to peak at the right time and that time is coming soon. Liberty senior Carrie Fish finished in second place.