Now that Piperi is off to the NCAA doing big things, that doesn't mean The Woodlands throws program coms to an end and definitely not on Coach Madore's watch.

There are several talented throwers in both the boys and girls program in Highlander Land and they proved it this weekend.

Although Tripp has graduated, momma and pappa Piperi have blessed The Woodlands with another Piperi. Junior Patrick Piperi was right along side his older brother last year at the state meet as he placed seventh in the UIL 6A shot put.

This year, Piperi has been on a tear as he has been dominating the throwing rings all indoor season leading into this weekend. At The Woodlands High School Invitational, he won both the shot put and discus and doing so with outdoor season bests. In the shot put, he threw 61-4 and 173-11.5 in the discus, which makes him Texas' top shot putter and #4 discus thrower in the state. 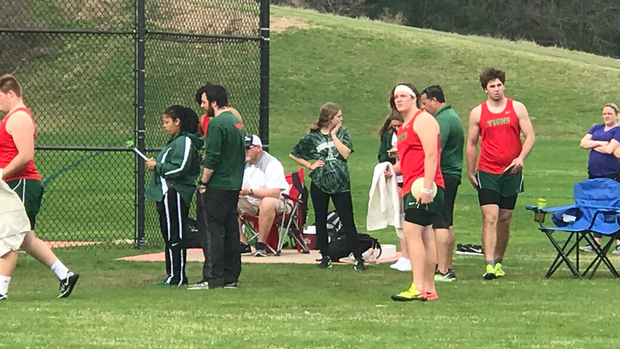 The Woodlands also has another big thrower. With Hunter Madore, another top thrower in Texas also graduating last year, it opens up the door for Sean Stavinoha. Like Piperi, Stavinoha is a junior and without a doubt can trow.

Stavinoha threw a SB 170-02 in the discus this weekend which is his second best all time throw behind his 179-2 PR. He then made the walk over to the shot put ring where he did get a PR. In just his second meet of the year, it marks Stavinoha's second straight shot put PR. In his first meet of the year, he threw 51-4. Yesterday, he blew that out of the water with his 53-8.25 throw to get hims second place.

The Woodland's girls throwers also had a big day.

Sophomore Nya Harmon led the way in the discus with her 125-0 for the win. Harmon, who placed second at the UIL 6A state meet as a freshman last year led her Lady Highlanders group this weekend. Teammates sophomore Morgan Sichley and senior Brittney Tucker also had big days. Sichley place third and doing so in 104-10.5 PR and senior Tucker finished fifth with a 92-1.5 PR.

The Lady Highlanders day first began at the shot put ring where Harmon and Tucker led the way for The Woodlands girls as Harmon placed second with a 39-9.5 best toss on the day.

Tucker was able to get up to fifth place in the shot when she threw 31-4.75, which was also a PR for her.

Everyone knows The Woodlands always has distance runners, pole vaulters, jumpers and an outstanding group of sprinters. This year, we better definitely watch out for the Highlanders that step in the the shot put and discus rings.