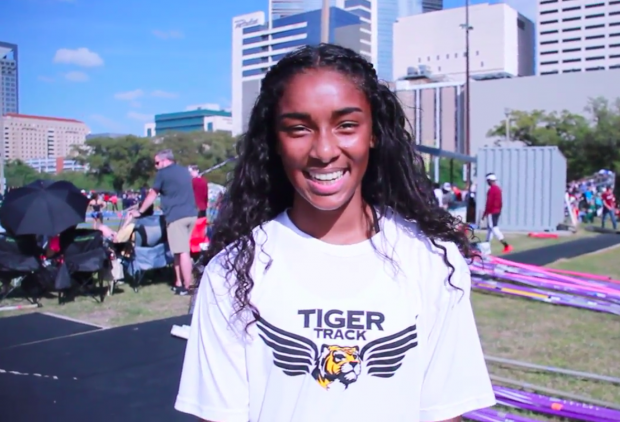 One of the beautiful things about running is that it forces you to constantly come into contact with challenges that teach you valuable lessons on and off the track.

Running a 3200 and you run your first two laps in an 800 PR? Exercise patience and trust the hard work you put in. Running small town races that you're guaranteed to win every time? Challenge yourself when things get too easy so that you can fulfill your potential. Eat a hot dog before your 400 only to profusely vomit afterwards? Adequate preparation doesn't just mean running a ton of miles as much as it means diagnosing every variable that can detract from your success and minimizing that possibility.

Here are this week's athletes that would've made any coach proud.

Lauren Lowe
When Lauren Lowe of St. Agnes toppled into the track at the Victor Lopez Classic, she could've easily chalked it up to an excuse that permeates high school running far more than it should... "a bad race". However, Lowe did just the opposite and quickly got to her feet to make up the lead that she lost. Beyond just finishing the race, Lowe also won her heat (which qualified her for finals) and gave every coach in the lone star state some valuable game film to show his athletes on how to overcome adversity.
Celia Holmes
Celia Holmes has achieved it all at Waco Live Oak Classical.
Between track and cross country, she's an 11 time state champion, possesses the TAPPS 2A State Record in the 3200 and 1600, and won TAPPS 2A Female Athlete of the Year. Despite winning the 1600 at the TAPPS State Meet by an average of 25 seconds over the last three years, the Baylor commit hasn't let her success stagnate her development as she has overcome the lures of complacency in dramatic fashion by improving 48 seconds since her 2015 freshmen season.
Holmes ran a 5:02 at Jesuit Sheaner Relays (a four second PR) to take second and put her six seconds ahead of 2nd ranked Caroline Miller (5:08.03) of Dallas Ursuline.
Ian Smith
El Paso Cathedral's Ian Smith traveled all the way to Chandler Arizona in a bid to go toe to toe with some of the best competition in the country. The Chandler Rotary Invitational had over 4700 athlete performances and Smith benefitted greatly from the competitive field. Smith ran a 1:55.69 which was a nearly 8 second improvement on his season debut and the top spot in our TAPPS 800 Meter Rankings.

Joseph Venzant
Texas freshman are really making noise on the national level as Joseph Venzant of Midland Christian debuted with a 44-7 triple jump at the Big Spring Invite on March 9th. To put that into perspective, two time end of year US #1 triple jumper Ja'Mari Ward debuted at 44-4 back as a freshman in 2013. Venzant improved on that mark by 6.5 inches at the Post Bold Gold Relays as he jumped 45-1.5 feet. With improvements and marks like this within the first two meets of the season, it's impossible not to wonder just how far Venzant can go!
Tweets by TXMileSplit