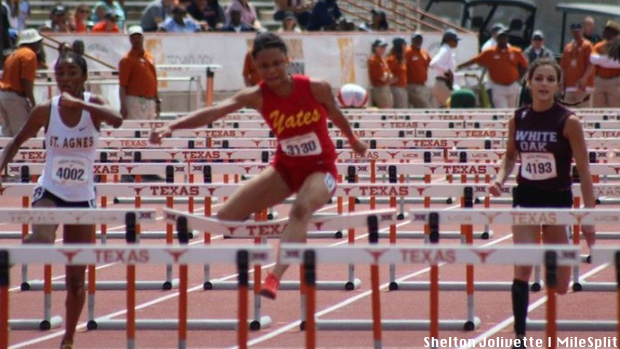 The hurdle events had some big time marks this weekend.

On Friday, Houston Yates junior Ally Henson was able to run a fast time in the Div I prelims. It was more than just fast, it was a Texas state leading and US #7 fast time. Her 13.90 preliminary run was just the type of race she had been preparing for all season long.

Houston St. Agnes senior Lauren Lowe was able come away with her second straight big meet 100H win as she ran for a 14.24. 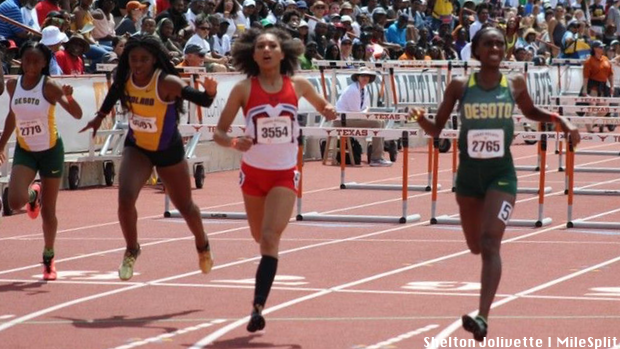 In the Div II girls finals, we saw one of the tightest battles of the weekend between DeSoto senior Antoinette Bradley and Mckinney senior Alyssa Miller.

In the boys 110H, the prelims once again produced some fast times.

The Div I boys prelims saw Wellington senior Luke Williams won heat 4 in 14.34 and Burnet senior Ian Burnet won heat two in 14.38. In the finals, Burnet took the win in 14.22. 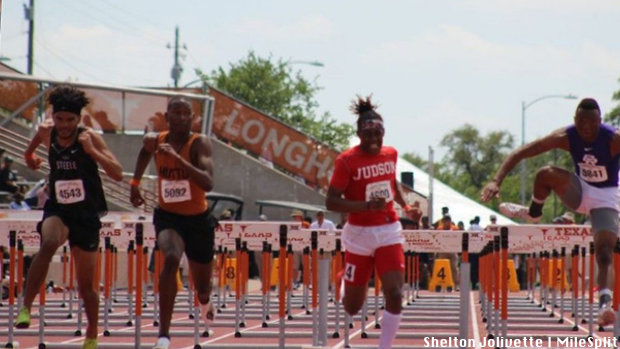 In the Div II boys, it took 14.37 to make the finals. The group was led by Hutto senior De'Vion Wilson who ran a wind legal 13.75. Cale Kassen from Valley View just missed cracking the 14 second barrier with his 14.05 run.

The finals was blazing fast. Unfortunately, it was a little over the allowable wind reading, but that didn't stop Wilson from dropping another sub 14. He ran 13.72 with Tre'Bien Gilbert behind in 13.91, Myles Marshall in 14.00, and Kenny Broadnax in 14.00 as well.

The 300 hurdles was one of the Friday night highlights. Lauren Lowe ran an outstanding 43.59 leading two other girls under 44. Lancaster's Kiara Smith and Calabasas junior Kyla Robinson-Hubbard both also dropped sub 44s with their 43.67 for Smith and 43.71 for Robinson-Hubbard.

The boys saw five boys run under 38 including the Texas #2 and #3 times of the season. Converse Judson senior Gilbert ran the second fastest time in the state with his 36.87 winning time. He was followed by Houston Strake Jesuit junior Caleb Cavanaugh.