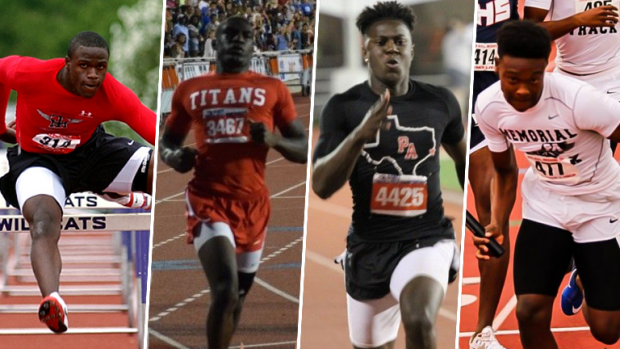 However, that doesn't stop him from manufacturing top notch 200m runners.

Over the years, his Port Arthur Memorial team has developed some of the fastest sprint relays and sprinters in the state.

The history goes even further back before Memorial HS was created. If you want to go back to the PA Austin, PA Lincoln and PA Jefferson days, you're really going to dig up some of the purest and fastest sprinters you might not know of.

But, what Granger has done at Memorial with 200m runners is something that maybe we should come to expect. Granger now has Ireon Brown running some of the fastest times in the state. In fact, his 20.61 at the UIL 5A - District 21-22 Area Meet this past week has him #1 in Texas and #2 in the nation.

As of late, the sophomore has really taken off. He started off the season with a 21.99 at the TSU Relays to then drop that to a 21.76 a week later. From there he went to the Rockhold Relays where he ran 22.44 in the prelims then to go 21.54 in the finals at that meet.

That is when Granger annually seems to shut the season down for the Memorial Titans competition wise and they go back into the lab. In "the lab", they use the time to train hard and get mentally prepared for the championship season.

Whatever goes on in "the lab" works. For evidence, look at last year's Port Arthur Memorial performances when they ran their fastest times of the year and catapulted to one of the fastest teams in US high school history in just the last two weeks of the season. They were already one of the best in the state, but it wasn't until after Granger took them back to "the lab" they performed historically. So, looking at Brown's current path, perhaps it really shouldn't be such a surprise at all.

He joins the likes of past Port Arthur Memorial 200m studs with that performance.

Some guy named Jamaal Charles walked the hallways at PA Memorial as well. He was mostly known for his hurdling in high school before moving onto the the sprints at the University of Texas, but he did clock in with a 21.02 in the 200m in high school.

Brown clocks in at the 15 on the Texas all-time list. The top ten on the list are clearly some of the historical type of guys who will always be talked about until the end of time. Brown is making his way up the list and the sophomore possibly has two more years under Granger's tutelage to crack the top ten.

As of now, he is joining the PA Memorial ring of honor with the names of Vincent Jr, Dauphine, Charles, and we can't forget the likes of Granger and Vincent Sr. Keep an eye on Brown as he ascends up the his high school list, the state list, and possibly nationally before it is all said and done.