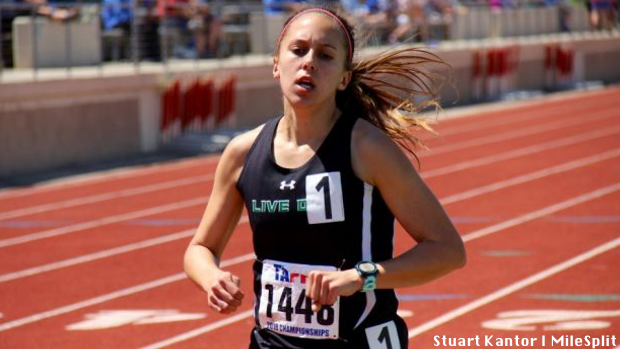 In what seemed like almost every other race was seeing state meet records or near misses, it was quite a weekend at the TAPPS state track and field meet in Waco, Texas. It is going to depend on the wind readings as to how many of the marks are legitimate records, but one thing is for sure, the meet was outstanding!

Day one was abnormal, as we saw more rain than a little bit. However the athletes and coaches of all teams as well as meet officials made all of the necessary accommodations to get as many of the field events in on day one as possible. The 3200m races were also competed.

That's when Shiner St Paul senior thrower Parker Clay went to work. Clay added to her legacy as she won a second TAPPS discus championship. In the shot put ring, Clay added her third title with a TX #2 throw of 47-0.

In the Pole Vault, the athletes had nearly a 12 hour delay from scheduled time of competition to the actual competition time. That is when the unthinkable happened. Dallas Parish Episcopal senior and three time 6A state champion Megan Fitzgerald experienced her first loss at the TAPPS state meet. She has won every year since her freshman year. Last season, Fitzgerald took the win with a 12-8 vault. On Friday, she would only go 10-6, which was her lowest jump in over two years. 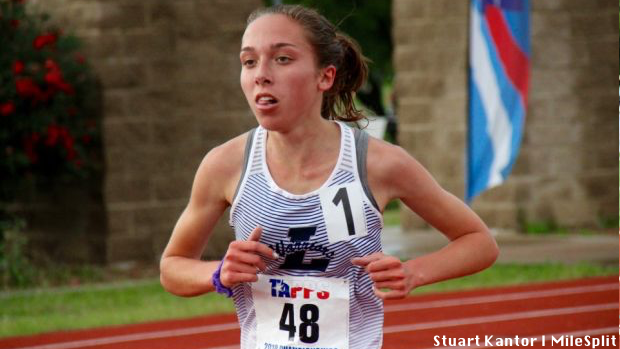 Perhaps, we have the next Megan Fitzgerald with San Antonio Christian freshman Abigail Craig. Craig won her first state title on Friday as she picked up the 5A girls pole vault win.

Many of TAPPS' distance stars hit the track on Friday as well.

Waco Live Oak Classical senior Celia Holmes has owned the 3200 for the last three years. On Friday, she came in as the meet record holder. She made it a fourth straight TAPPS 3200m championship as she took off from the gun and finished in 10:56.55 to lower her record. Holmes' outstanding weekend continued as she would add her third the 800m title with a win and her fourth 1600m title on Saturday.

On the 6A girls, the Queen of TAPPS distance running Elizabeth Reneau began the end of her TAPPS career on Friday. Reneau had already won her fourth cross country state title in the fall, but this weekend she added her 12th and 13th TAPPS state ritles with wins in the 3200m and the 1600m on Saturday. That makes a title sweep in both events. 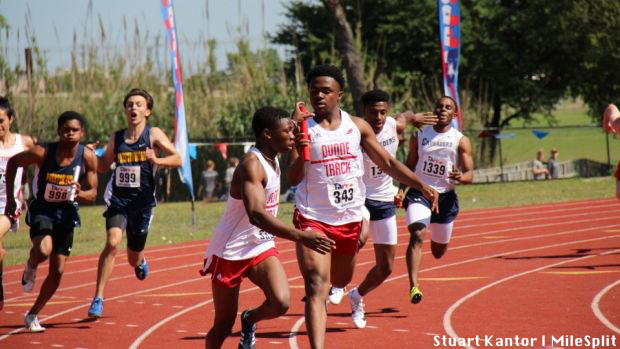 A rainy and wet day one of competition gave way to a dry and typical warm May Saturday afternoon. That is when the athletes brought the fireworks.
Things got extremely fast really quick.
The 4x100 relay action got the track hot as things built up to the 5A boys showdown. It was no secret Cedar Hill Trinity Christian had the speed, but the questions was could they hold off the couple of legit challengers. Tyler Grace and San Antonio Christian gave a valiant effort to knock off Cedar Hill Trinity Christian, but it was to no avail as they won the title with the fastest time of the day in 42.05.

In the 6A boys, the super fast Bishop Dunne quartet was fresh off of last year's record setting performance. They came in to this year's meet with a couple of 40.x times on the year and as one of the top teams in the entire state. A not so clean race was the only thing that could hinder Dunne and it did. However, they overcame the exchange zone diversity and still showed the type of speed the have as they still broke the state meet record with a 42.22 just ahead of an outstanding challenge from Plano Prestonwood and Fort Worth Nolan Catholic.

The speed continued throughout the day as Bishop Dunne sprinters were ready to duke it out for the sprints. The 100m was a heck of a race as Jalen Drayden and Marquez Beason shot out of the blocks and through their drive faze. When they came out of the drive they were clearly ahead of everyone except Prestonwood sophomore Dennis Phillips. The three sprinters sped down the track to a close finish with Drayden taking the win in 10.59 to Beason's 10.65 and Phillips' 10.69. 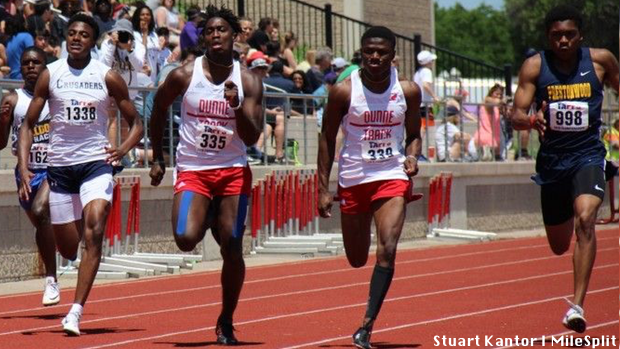 The TAPPS 6A hurdle events were perhaps two of the best shows all season long. Legit superstars Lauren Lowe of Houston St. Agnes and Tamia Badal of Tomball Concordia Lutheran put on two entertaining shows. First, in the 100H, the two ran neck to neck through the majority of the race until Lowe pulled away ever so slightly in the end. Lowe got the narrow victory in 14.34 to Badal's 14.54.

In the 300 hurdles, it was much of he same. It wasn't until late when Lowe was able to pull away as the same two competitors raced it out.

In the 5A boys field events, Cedar Hill Trinity Christian senior Camiron Smith grabbed a couple of victories. Smith placed second in last year's long jump. This year, he grabbed the top spot with his 22-9.25 performance. He also defended his triple jump title from last season. Smith improved on last season's winning jump of 44-11.25 winning jump a 46-5.75 for the win. For good measure, Smith also added team points and another medal to his collection with a second place finish in the 200m with a 22.53. 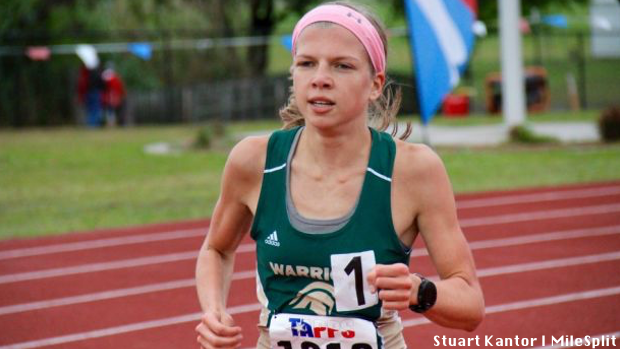 The Woodlands Christian had outstanding performances all weekend, but they really shined bright in the distances. Sophomore Ellenor Catron had a very nice freshman year with her two state meet finishes last year. However, this season was drastically even better. Catron was entered in the 800m, 1600m, and the 3200m. She started things off in the 3200m on Friday with a 10:58.71 for the win. Then on Saturday, she went smooth off at the meet coming home with a 2:22.44 and a 5:11.50 for two more victories. That gave her three PRs for the weekend to go along with her TAPPS 4A cross country state title from the fall.

Then, The Woodlands Christian boys got in on the act. On Friday, the Shearer brothers took the top two places as they went 1-2 with Joshy Shearer and freshman Ben Shearer, Joshy won it with his 9:44.23. Thy just missed making it a medal sweep as freshman Josh Mueck finished without a medal in fourth.

Mueck's older brother Ben Mueck would change things on Saturday as he earned his medal. He did so by winning gold in the 800m with a record 1:54.75 with Bean Shearer in third in 2:02.56. Joshy Shearer would add more medals and team points with his second place in the 1600m with a 4:34.43 finish. 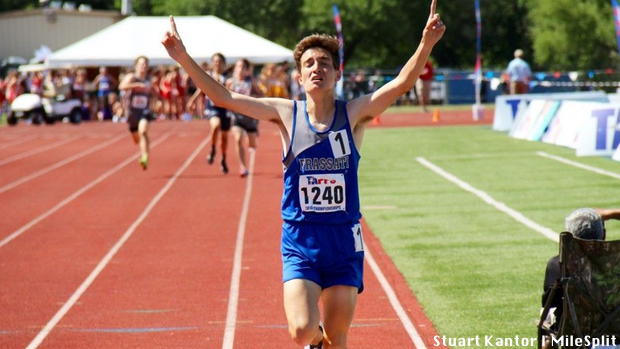 El Paso Cathedral junior Brandon Seagreaves had a great follow up to his 2017 season. In cross country, he added a repeat title. This weekend, he repeated last year's triple crown with doing it all over this season. He added wins this weekend with a 9:29.80 in the 3200m and a 4:23.08 1600m. 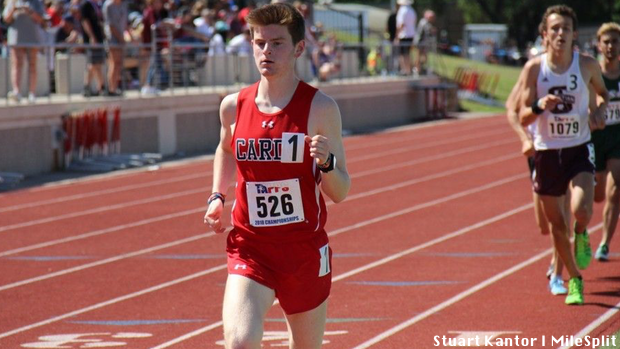 At the end of the day, Fort Worth Christian junior Carter Cheeseman motored his way to a 1600m state title and meet record. He ran 4:16.48 for the win adding it to Friday's 3200m win and record run. Cheeseman ran even 1:10 laps across the board until he let loose on the final lap to finish with a 9:12.83. Cheeseman adds both titles to his cross country state title to make it a triple crown.