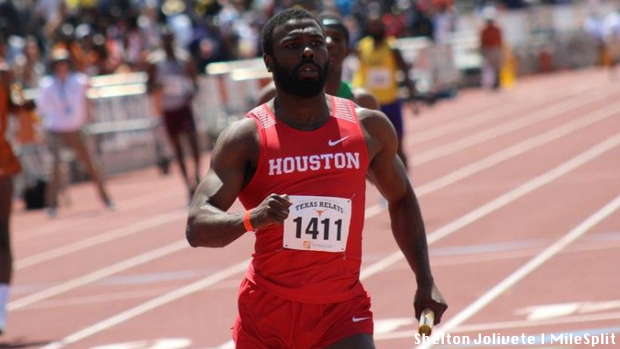 It is no secret that the University of Houston Cougars had speed. In fact, that is a gross understatement. They have more speed than should be allowed, but it is allowed and they flaunted it at the 2018 NCAA Championships in the 4x100 finals.

Houston placed it's quartet of John Lewis, Eli Thompson, Mario Burke, and Cameron Burrell on the track for the finals not only facing the best collegiate runners in the world but also the weather elements.

The other athletes on the track all had beating the Cougars on their minds. Houston was positioned in the middle of the track in lane 5 for all to see. The defending 4x100 relay champions were back for the repeat and the others all wanted to defeat them.

Neither the big stage, being the hunted, nor the cool and wet conditions could stop them. Everybody knows that warm to hot temperatures and definitely dry conditions are the ideal for sprinting and even more so for relay execution. University of Houston coach, Carl Lewis said, "This team is loose, they're ready to go, they really believe."

The Cougars demonstrated Lewis' statement almost to perfection as they put on a show. With three of the four legs qualified for  the 100m finals, that "more speed than should be allowed" was exhibited as they ran head and shoulders on another level than any other team on the track.

In the end, Houston now has two consecutive NCAA 4x100 relay titles and a 38.17 NCAA record as they took down a 29 year old record previously held by Texas Christian University (TCU).

To add a cherry on top, that 100m final that I said had three of the relay members in it...well, they only went first, second, and eighth -- more speed than should be allowed.