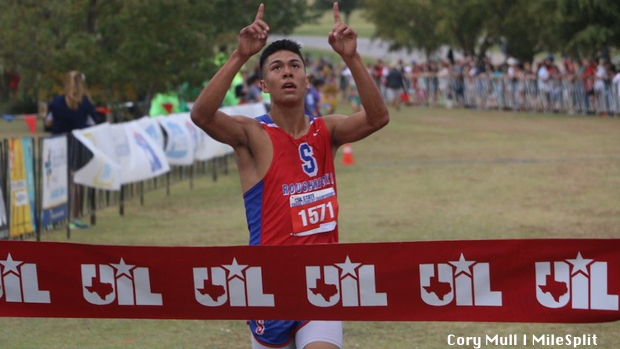 We've seen just about everything over the years in cross country from packs of deer straight running over athletes, to mud slide courses, and the biggest and brightest stars.

One of the biggest stars in the state is 1A boys two time champion Steven Quintanilla.

Quintanilla is the Sundown senior that is just playing his part as many athletes from his town and school does. He is not the first good runner to come through Sundown, but he is the latest as he will go for his third consecutive cross country state title.

Quintanilla isn't just a star distance runner. He is a Swiss Army knife do-it-all kind of guy. He plays football, basketball, and baseball as well.

However, he still finds time to put into sharpening his running skills. As a freshman, his skills weren't all of that, but within a year, things definitely changed. He went from a 18:46.66 PR his freshman year down to a 16:13.98 to win state in 2016 then down to a 15:56.57 last year at state for his second XC title.

He has also focused his efforts to improving on the track as well.

After his 2016 cross country state title, he was set on going to Austin to be a state champion. He accomplished that in the 3200m, but he took second place in the 800m. This past spring, he wanted to return home with two gold medals from the track season and he successfully did it by winning defending his 3200m title and then adding the 800m with a victory.

Will anyone push Quintanilla this fall or will he continue to add gold medals to his legacy with another individual title and another team title?

Well, if there is going to be a push it'll have to come from Milano senior Parker Jones. Jones is perhaps one of the few guys who has the endurance and speed to run with Quintanilla. He has a 2:05.07 800m best that isn't quite the same as the 1:56 range that Quintanilla has hit, but Jones' 1600m speed gives him a shot. He ran a 4:26.77 PR at the 11th Annual Schrader Mile and then won the state meet a week afterwards. He also has a 16:25.53 5K PR that he'll look to lower with his newly tested speed.

Then there is Luis Cardiel of Valley View. Cardiel has the experience from running for a program like Valley View. He has been able to train with some of the best 2A runners over the last year and get the state meet experience every year as it's a yearly trip for his team. Last year, he finished third overall with a 16:23.71 PR at state. He followed that up on the track with a third place finish in the 3200m and fourth in the 1600m, so he also has the strength and speed to try to give Quintanilla a run for his money.

If neither Jones nor Cardiel can outrun Quintanilla, it'll have to be a newcomer to do it.

Then again, maybe it just isn't meant to be and Quintanilla is actually "The Man."