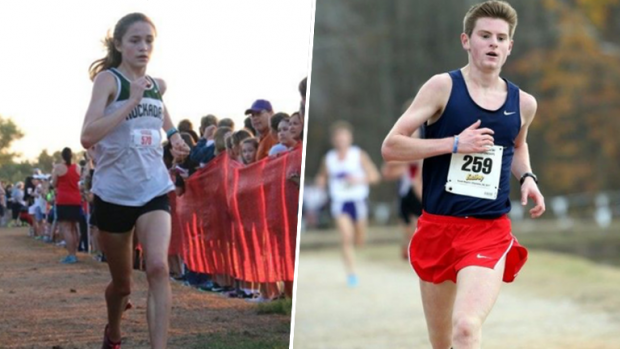 While this weekend will conclude their high school careers, it is far from the end of things altogether. In fact, it is also very far from the beginning.

In addition to both runners being seniors, having won multiple state cross country state titles, and both making their second straight trip to the Foot Locker Nationals, they have an even more important similarity. Both athletes have the sport running through their family histories.

Vaughan's mother, Glenys Quick is currently employed at Dallas' Hockaday School, where she hast taught film studies and journalism for the last 22 years.

However, Quick's career portfolio in teaching is just the tip of the iceberg. Quick was runner and a pretty darn good one. While she got a pretty late start to the sport, she eventually took off running.

As a high schooler in New Zealand, she started running as a senior in high school, she earned an athletic scholarship to Texas Women's University (TWU) in denton, Texas.

Related:  Adoette Vaghan Goes For Fourth SPC XC Title
At TWU, Quick would run in several NCAA championships, which would eventually lead to her setting a New Zealand national record  in the 800m.  Vaughan began running marathons racking up a 1984 Nagoya Marathon (Japan) win, and a 1984 New Zealand Olympic team berth as an alternate. She would later add 14th place finish in the World Track and Field Champi­onships, and sixth place finishes at the Chicago Marathon from 1983-1985.

It's one thing to put in perspective how awesome Adoette Vaughan is to be able to win 4 SPC individual XC titles, but to pass the lead bike....Who does that? pic.twitter.com/lKQrYKsDJy

The family pedigree runs even deeper as older sister Tala Vaughan also ran and father Robert Vaughan coached professionally. Adoette's high school success has only fueled the fire as she has college in her future and the Olympics on her mind.

This weekend, the Hockaday senior will look to improve on her 9th place finish from last year. Two weeks ago, she ran to a sixth place finish at the Foot Locker South Regional running the second fastest time of her career.

For Cheeseman, running in his family has already been documented. It was 36 years, his father, Ken Cheeseman competed at Foot Locker Nationals (Formerly known as Kinney), representing his home state of Florida.

Ken Cheeseman went on to have a successful high school career running as fast as 4:07 in the mile. He continued with a collegiate career, competing at the University of Virginia.

Mother, Cathy Cheeseman is an accomplished coach at Fort Worth Christian as well as the coach for Carter. Mrs. Cheeseman also ran collegiately at the University of Tennessee at Chattanooga.

Carter's siblings are also accomplished runners. Oldest sister, Allison was a two-time TSSAA cross country champion and currently runs for Davidson University and his other older sister, Claire, is a sophomore running at Belmont University.

Related:  Carter Cheeseman To Compete At Foot Locker 35 Years After His Father Did

Even younger sister Abby Faith is joining in on the running action in the family. As a sixth grader, she is currently the sixth fastest girl in TAPPS this season at the 3200m distance with her 12:13.50.

Last year, Carter finished sixth overall at Foot Locker Nationals. Running in his last high school cross country racer his weekend, he could be going for the gusto and looking to improve on last year's finish. He already has one win in a national race this season, expect to see him running for the win on Saturday.

Both Vaughan and Cheeseman already have top ten finishes from last year's championship race. At this point, there is no next year as prep runners as they'll both soon be running in the NCAA.

At this point, they will be running and putting it all on the line. They'll also be running with family history on the line with them.