There is no sense of discussing whether Natalie Cook (Flower Mound) is the best distance runner ever to come out of Texas. She clearly just made the distinction that she is the best girls distance runner in the history of high school running in all of the United States.

On Friday, she ran a 15:25.93 National Record in the 5,000m. This comess after her US No. 2 All-Time 5,000m during cross country season 16:03.93 at the Garmin RunningLane Cross Country Championships and her US No. 2 All-Time 9:44.44 in the indoor two-mile. Cook now stands alone at the top with every other runner in history look up at her 5,000m performance at the Stanford Invitational.

The Oklahoma State University signee didn't compete in the College Women's division, she chose at a higher level in the Invitational Women's 5,000m race with the best collegians and post-collegiate runners who were entered in the event. Athletes sponsored by Adidas, New Balance, and Nike, as well as an Olympian from Israel were also in the Invitational race.

Cook maintained lead pack positioning for the majority of the race and even led several laps in the latter half of the race. She finished third overall with the historic 15:25.93, eclipsing Hutchins' mark of 15.34 set last season and the previous mark of 15:45 by Cain. For more perspective on Cook's race, she produced a current Top 10 mark in the World. 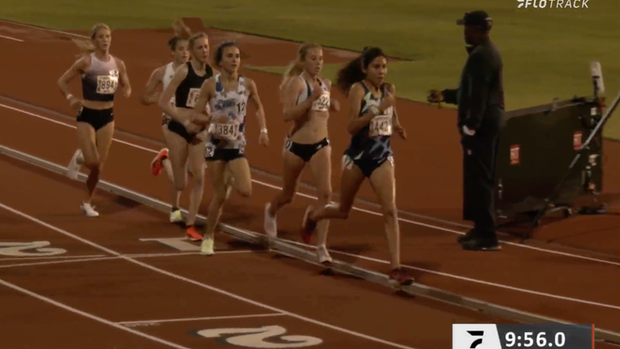 Cook executed nicely during the race. The front runner isn't accustomed to running behind anyone much this year. With the exception of a couple of laps, she had other runners leading the race. Cook didn't get into trouble and was able to find rail position, which enabled her to not run extra distance by running on the outside. She also did a nice job keeping her stride frequency and controlling her spacing and to not get cut off.

Cook has climbed the all-time list at the two-mile and 5,000m distances. The UIL championships season is around the corner, we'll get to see if she can continue to make history when her focus turns towards the 1,600m and 3,200m races.