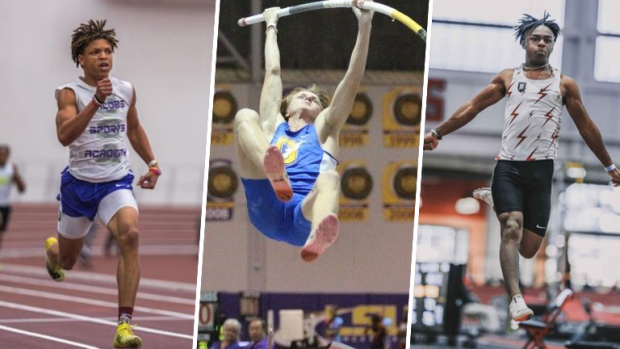 10 Girls To Watch At The Arkansas HS Invitational

Torns is the second-best returning indoor long jumper from the 2022 season. He leapt 24-3.5 to finish as the runner-up in the championship boys section at New Balance Indoor Nationals a year ago. He also finished runner-up at the Texas UIL state championships. Torns will compete in the 60m and the 200m as well.

Wolfe enters the weekend as the U.S. No. 1 long jumper over the 2023 indoor season and a U.S. No. 3 triple jumper. He jumped 24-5.25 last weekend at the KYA HS Indoor Classic and went 49-1.75 in December at the The Galleria Games. He is scheduled to compete in both this weekend.

England is one of the top sprinters so far in the 2023 indoor season. He ran 6.99 in the 60m prelims at the LSU High School Classic and followed that up with a 6.91 in the finals for the win.

Boyer will compete in the mile this weekend at Arkansas. He ran 4:22 last indoor season and lowered that during the outdoor season to 4:15.

Sanchez is listed to compete in the 3,000m. He is the Texas UIL 4A state champion in the 1,600m and the runner-up in the 3,200m. He recently won the UIL 4A cross country state championship and was a finisher at the Champs National Cross Country Championships last month.

Chukwukelu is a U.S. No. 1 hurdler so far this indoor track and field season. In the 60mH, he ran 7.83 in the prelims and ran even faster in the finals with his 7.80 at the The Galleria Games.

Kendricks will pole vault this weekend at Arkansas. Last weekend he won the event at the LSU High School Classic with a 16-5.25; the Mississippi No. 1 currently ranks U.S. No. 4.

Underwood is a U.S. No. 5 performer this indoor season in the 400m. He ran 48.74 last weekend at the USATF All-Comers #1 and will compete in the event this weekend in Fayetteville.

Williams jumped 6-6 last indoor track and field season and he improved to 6-10 outdoors. So far this year, he has already cleared 6-8 for the winning jump at the Prentice Gudgen Invitational last weekend.

If you're a fan of track and field then Simms' name isn't new to you. He has set several AAU age group records in the 400m and 800m events. He now sets out for his sophomore year and begins this weekend He will compete in the 400m and pick up where he left off last year with a 47.68 and the second ranked freshman in the country.