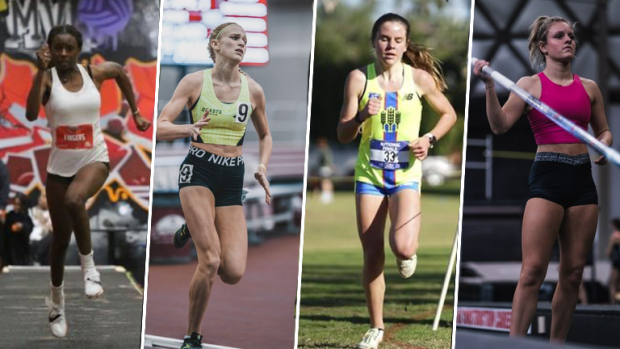 Last year, Fey became the No. 3 all-time discus thrower in the state of Texas. But that doesn't mean she isn't top notch in the shot put, either. She threw 43-9.75 indoors last year and went over 46-11 outdoors.

Last year, Homoly was a U.S. No. 5 vaulter indoors with a best of 14-feet. This year, she is off to another great start after going 13-6 at the Expo Explosion on December 31. There is a good history of vaulters at the Arkansas runway and considering Homoly is an Arkansas commit, expect her to let it rip.

Robinson was a key member of the Cypress Ranch relays last year, but this season she could be the star of the show. Last weekend at the LSU High School Classic, she won the 60m in a US No. 4 time of 7.51.

Lowe enters the meet as the highest ranked 400m runner in the field. She ran 56.93 on December 17 at the The Galleria Games. The event will no doubt take faster than that to win, but Lowe should be one of the favorites.

Fingers will compete in the long and triple jumps. She will be one of the best in the country this year and has already tipped the scale on that this year. She has a U.S. No. 7 mark in the long jump with her 19-6.25 and is No. 2 in the triple jump with a mark of 41-9.25. Both jumps were from the North Texas Showcase beck in December.

Banales will compete in the 60m and the long jump. It's is the long jump event where she will dazzle the crowd. She has already jumped 20-8.5, which currently ranks US No. 2.

Gunter is entered in both the 60H and the high jump. The high jump is one of the many events Elmore excels at, but when it comes to being lights out, the high jump bar is where it is for her. As a sophomore last year, she cleared 6-0. It'll be fun to watch her go at it this weekend.

Littlefield is one of the top athletes in the country for middle-distance events. She is entered in the one mile this weekend and will probably compete in the relays for Lovejoy. She won the meet's event last year -- in 5:01.85 -- before going on to run 55.91, 2:06.21 and 4:55.75 over the season.

Jackson is entered in both the 60m and the 200m. She has to potential to win against the loaded sprint fields. She ran 7.59 last indoor season and could begin things on a fast note this weekend.