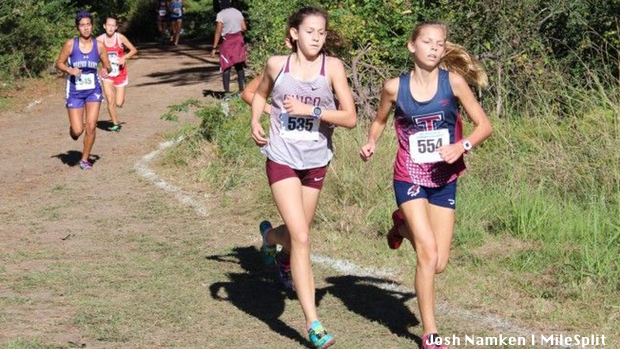 Last year, the girls Class of 2021 showed just how much they were going to rule the state in distance running over the next couple of years. They displayed how deep and talented of a class it is.

One of those runners landed at Katy Cinco Ranch in Heidi Nielson.

Nielson ran her way to a fourth place finish at the UIL 6A state meet and then onto Foot Locker Nationals. On the track, she blazed to state as well ending with a third place medal in the 1600m and then a win and PR in the 5,000m at the NBNO.

The thing is, the girls 2021 class was even better than you know and so was Cinco Ranch. Yes, Nielson is outstanding, but they actually had two outstanding incoming freshman girls.

A long time friend and training partner of Neilson's for years also enrolled at Cinco Ranch last year, but her season would go in a completely different path.

Expectations for Sophie Atkinson and her freshman year were pretty high and were on the same lines of the things Nielson would achieve. Atkinson was also an accomplished youth runner and the plans were for Cinco Ranch to enjoy their senior class and join their experience with the youth and limitless talent of their two incoming freshmen.

Then two unforseen and damaging occurrences struck for Atkinson. In August of 2017, "Our home flooded during (Hurricane) Harvey and at around the same time she fell on the bayou during practice and fractured her 3rd metatarsal," Mrs. Ericka Atkinson said.

Atkinson would start off her high school career with her home devastated and her community going through turmoil. All of the while, she was in a boot for four weeks.

Her life had changed all of the way around. The situation at home was difficult as she was missing one of the things she loved. "Running was my passion and a big part of my daily life. Not being able to run was the most challenging thing I've ever been through."

She only returned to running five weeks after the injury, and boy did it have a heavy impact on the young runner. "It was really hard having to sit out and have to watch everyone get better and meet their goals when I was if anything going backwards." 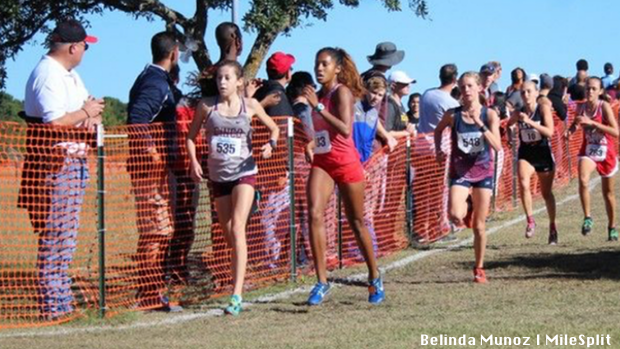 Running is more than physical, a big component of it is mental. While she had to sit out for over a month and watch girls prepare for tapering and speed work to get ready for championship season, Atkinson would be trying to get in shape to rejoin her team for a hopeful run back to the state meet and she would.

Things just weren't the same though.

"It was really hard having to sit out and have to watch everyone get better and meet their goals when I was if anything going backwards."

Workouts were difficult and meets even more so. "It was extremely difficult having my mind think I could do one thing and my body not physically being able to. Before, in all my races I would have a priority of winning along with getting a fast time so having to settle for a more realistic goal was really hard. Without having any speed training the six weeks before the State meet made the start of the race super chaotic and stressful where before I felt confident and knowledgeable about putting myself in a good position. Initially coming out of my injury I expected myself to be back in my top shape close to State so seeing that I was nowhere close was discouraging."

With the injury behind her and cross season over with, she could then turn her direction and focus to preparing for a good track season, right?

Atkinson would feel pain and discomfort, yet again. In fact, it would be the same injury on the same foot, just a different toe. "My second injury was late December 2017 - that was a stress fracture 2nd metatarsal right foot."

Mrs. Atkinson said, "Basically after her second injury the doctor totally shut her down to look into the reason behind her multiple fractures and believed that because she was still growing her bones were more vulnerable." While rehabbing, Atkinson had grown four inches over the couple of months. Common reasons for these types of fractures include falls, automobile accidents, and sports injuries. Atkinson had two of those....a fall and running induced. This means that the amount of energy being absorbed by the bone exceeds the strength of the bone as well as with the repeated stress to the bone.

"After her stress fracture she was 6 weeks in the boot and then 12 weeks in physical therapy followed by a very slow and cautious return to run program that had her back to a more normal training program in late April/early May," Mrs. Atkinson shared.
Sitting on the sidelines for the most part of two seasons were definitely difficult. But, a year later she can reflect back on the time and she knows what she learned. "After going through a really hard time, I had to try to balance being a good teammate. Heidi and I have trained alongside and competed against each other since we were 10 years old and are friends, it was extremely difficult because I had also envisioned that same success for myself, but I was super happy for her.
It was also important, "Being in a good emotional state and focusing on my recovery so I missed a lot of races because it was just too hard for me to watch.  I focused on cross training and physical therapy which was unfulfilling and strenuous but I knew was getting me closer to my end goal." 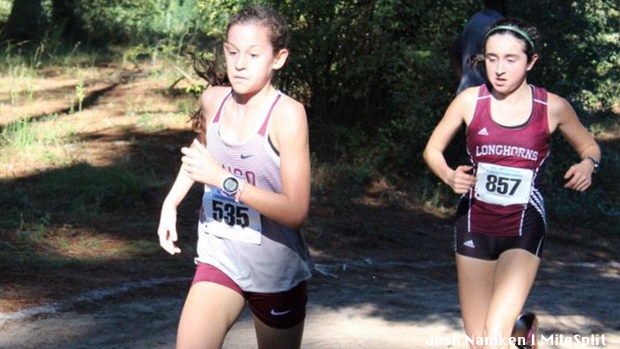 A Fresh Start And New Season Reunites Friend And Family

Last week at the Cypress XC Relays, Atkinson got back on the competition saddle and things went well, "I feel like last weekend was a good start to the season. I was finally able to run with my team and run with more confidence."
Last week and this 2018 season is important for other factors as well for Atkinson. "It was especially fun getting to run with Heidi because its usually a competition between the two of us and we never get to join up and win together. I feel like in the past training together has allowed us to push each other to excel especially having her at every practice and every race.  Having her to train with this year will be like every other year but will be especially nice to train with her now as I try to get in my peak shape."
Neilson isn't the only person on the Cinco Ranch team that she is familiar with. Senior and older sister Mary Ella has been on the Cinco Ranch varsity squad for years. Last year would have been the first time they were to compete together. "I'm so excited to get to run with Ella this year because we never really get the chance to be together on the same team in the same race. We always have so much fun together so being able to be around each other more before she graduates is awesome. It would be really rewarding to see everyone fulfill their potential to where we can achieve our goals we've always had for our team."
This season, Atkinson could be an underdog or overlooked by many of her competitors. Looking at her performances, they aren't necessarily superb and they definitely aren't up to her standards. "Because I was a freshman last year and didn't get to ever really race I don't think anyone really knows me or expects anything from me."
A lack of expectations could be a good thing considering the expectations of last season and then what she went through. It could be advantageous for her, however the only ones she is concerned about are her own. "I've always set very high expectations for myself and am not really that influenced by what others expect out of me whether its that I should win a race or that I can't win a race. The main contributor to my performance 99% of the time is where my confidence is and what my own expectations are." 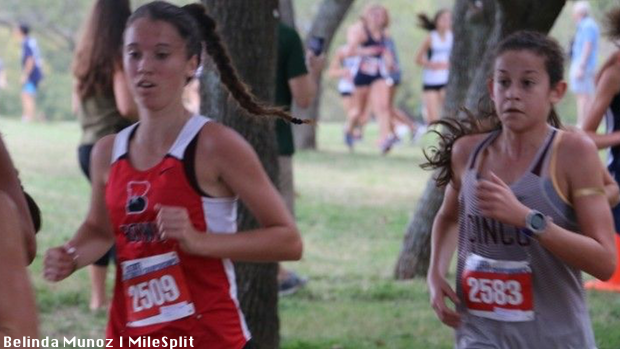 At this point, it isn't about making up or proving for this or proving that.
This season will be the start to a new runner.  One moment, you can be out running with your team with no cares in the world and the next moment everything can change. As Atkinson learned, "The things that you don't realize you are taking for granted aren't a given and anything can happen at any time."
"It's taught me more about the sport and the things I need to do to stay healthy. After my second injury I was told by my doctor that with not drinking milk and still going through growth my bones were more prone to injury.  I learned the importance of fueling myself in the right ways."

On advising athletes who may experience the things she did last year, Atkinson said, "I tend to be very impatient with my running expectations and that is unhelpful during an injury, so I would tell them to give themselves some grace and time to let things work out. I wasn't really motivated to do the things I didn't enjoy like swimming and rehab but remember it will ultimately help you in the long run and is not something to be brushed aside. Also, prioritize your emotions and take time to recognize your feelings during a challenging time."

Atkinson just wants to be healthy and do what she loves - run. Having a chance to compete and do her best is what concerns her. All a girl needs is a fair shake in 2018 and she will add to the crazy talented Class of 2021 girls.
Tweets by TXMileSplit