Yes, I know how to spell Wednesday. However, this spotlight is for the winners from this past weekend and best to appropriately spell it as Winsday? Their performances deserved the acknowledgement for what they accomplished.

Both squads from Champion had a good weekend at the FEAST Patriot Invitational as they both ran away with the varsity team titles.

The girls squad won another meet in this 2018 season. We last saw them in person in week one at the Vista Ridge Inv. as they won over a tough Smithson Valley team in the Girls Varsity race. This weekend, they did it once again in the Girls Gold race as they took down the host team and MileSplit50 #11 San Antonio FEAST.

However, the win did not come without a tough challenge. As expected, FEAST would bring their A game to the race and Champion was still able to come out on top. The margin of victory was as slim as possible with the Lady Charger's win coming by only 1 point 54-55. They ran tough as they finished with a 19:57 team average and a 1:04 1-5 split.

The Champion boys had a heck of a challenge on their hands in the boys varsity race as well. Their challenge came from a very good and MileSplit50 #12 6A team McAllen Memorial and Del Rio. The final standings came out to Champion's winning total 71, Del Rio 74, and Memorial 77. Champion was able to run a 16:41 team average with a 1:21 split, which was just enough to survive Del Rio's 16:47 average and excellent 18 second split.

Also can't forget about the viral footage they were able to display with their crazy freestyle flow after their wins this weekend.

Duplesis is on a mission to get back to Round Rock to compete for a UIL 3A state title. Last year's finish at the state meet wasn't exactly how he probably planned as he finished just outside of the top 10 in 13th place with a 16:27.27. He did finish as the 3200m runner up at the state track meet with his 9:43.60. Now, he wants to do as well as that or better this year in cross. This weekend he won the FEAST Patriot Invitational 15:46.87, that's a heck of a start.

Heslop continues to roll as she won yet another meet. She won the FEAST meet with another sub 18 min run. She got a good challenge from Laredo Nixon's Alexa Rodriguez, but she was strong enough to win in 17:56.77.

The 2018 year she could be looking to improve on her two second place finishes at the 2017 Homeschool State Track Meet. You are tripping if you are not recognizing this young lady's accomplishments no matter what division she is or isn't in. 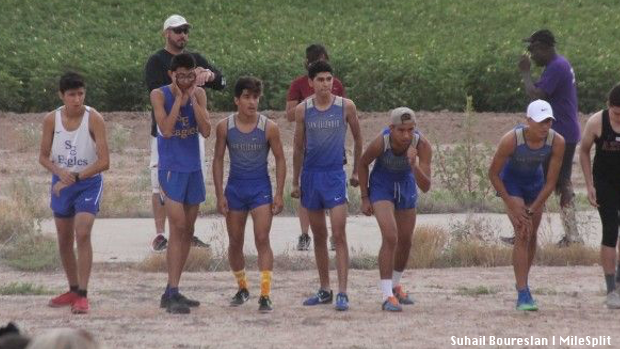 Perhaps nothing should be surprising when it comes to San Elizario's accomplishments, but this one is worth mentioning. This weekend, they took on Tornillo ( 2-16 and 2017 UIL 3A state team runners-up), and El Paso Eastwood (2017 UIL 6A state team 3rd place) as they came out on top.

San Eli (As they are commonly known out west), themselves are known for their success, especially recently with their four straight UIL 4A team state championships. But, this regular season match up shows just how strong they currently are. They took on El Paso's top teams and came out with the win including taking down an Eastwood who has been running just as well as anybody in the state. San Eli was able to do so with a 30 point total, 16:11 team average, and a 1:12 split. They were led by their individual state champion Edwin Gomez who won the meet in a PR 15:30.08 who won the distance triple crown last year in 4A as a freshman.

Coming off of last year's performances, Andrea De La Rosa is quietly becoming a star down in south Texas. This yeare, she is already racking up win after win setting herself up for a possible run for a state title.

This weekend, she ran away with the Mercedes Livestock Show Inv. Mercedes Livestock Show Invitational cruising to a 19:42 victory. This race was fresh off her victory at the Mercedes Invitational, last week. As the season progresses, we may see De La Rosa get a challenge either at the RGVCCCA Meet of Champions or the Islander Splash and then again maybe not until the Region 4 meet. Either way, she is on a roll and keeps winning.

Clover, just a Sophomore, was able to get her second win of the season at the Oak Ridge Meet this weekend. She won the meet with her 18:51.13.

As a freshman, last year, she qualified for both the UIL 6A cross country state championships and the track and field state championships in the 3200m. With hopes to do so once again, improvement is definitely the goal and this season is off to a great start.