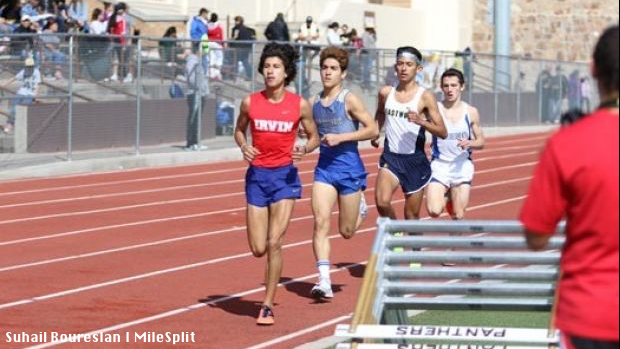 At the Truman Wills Invitational, El Paso's distance runners were off to a quick start to set the tone for this year's season. Eva Jess from El Paso Franklin took a commanding lead after the first lap and never looked back. Jess pushed a hard last lap to come in with a time of 11:34.15. Andrea Perez, also from El Paso Franklin, had a great race finishing second with a time of 12:00.30. Other notable runners: El Paso Eastwood's Eileen McLain - 12:23.70 'PR' and El Paso Eastwood's Meadow Ortiz - 12:23.83 'PR'.
Girls 3200m at Truman Wills Invitational
The boys 3200m was very much the same, a lot of grit and determination to make a statement in their first race. There were four runners under 10 minutes in the boys 3200m race who battled all the way until the end. The pack was tight for the first lap but going into the third was when Aaron Gilliam from El Paso Irvin really seemed to take control of the race. Gilliam, a senior, was able maintain his spot at the front and finish strong with a time of 9:51.16. Not too far behind was one of Eastwood top distance runners Gabriel Armijo, who finished not far from Gomez. He came in at a time of 9:54.43. Other notable runners: San Elizario's Edwin Gomez - 9:58.25 'PR" and El Paso Cathedral's Brandon Seagreaves - 9:59.29.
Boys 3200m at Truman Wills Invitational

Truman Wills Invitational was rained out on Friday pushing many events over onto Saturday,  meaning some events would have to be ran much later in the day than what these athletes are accustomed to. However, that didn't stop the 1600m runners from giving it everything they had. The race started and again, Eva Jess and Andrea Perez from El Paso Franklin were battling for the top spot. Behind the pair was another competitive race with El Paso Montwood's Kayhla Talavera and El Paso Eastwood's Francis Hernandez proving they had what it takes to be a top runner in the city. In the end, Jess proved to be resilient and capped off her weekend with another first place finish with a time of 5:24.57. Perez was able to PR with a time of 5:38.40. They were followed by Talavera with a time of 5:43.39 and Hernandez with a time of 5:49.34.

Much like the girls, the boys were determined to not let the long day affect their race as we had three runners under 4:30 minutes. The race was a real nail biter from the gun. El Paso Hanks Michael Abeyta and Nicholas Moreno were out to show that they could contend with the best Texas has to offer. However, Aaron Gilliam wasn't about to go down without a fight. He managed to show real tenacity as he was able to hang on and push through to second place, finishing between Abeyta and Moreno. Gilliam finished second PR'ing with a time of 4:23.60 and Moreno was a close third with a time of 4:26.26. Abeyta came in first with a Texas #1 time of 4:21.34 and is also a top Boys Performer of the Week. If you'd like to vote and support him click here. Notable runner: El Paso Cathedral Brandon Seagreaves - 4:38.18.
Tweets by TXMileSplit