The Texas Relays girls 1600m perhaps was actually only a 100m race. The previous 1500m was just a set up for all eyes to tune in for the last stretch.

Adoette Vaughan, Brynn Brown, and Heidi Nielson all ran three and three quarters laps in sync until it was time to sprint.

This race was a highly anticipated race as Hockaday junior Vaughan was coming into the meet as one of the hottest runners in the state. She has been PRing every weekend in every event that she has competed in. While her winning streak might have come to an end, that didn't end her PRing streak. Vaughan would run an all out down to the wire type race and to a new 4:53.49 1600m PR.

The victory went to Vaughan's Foot Locker Nationals South teammate Heidi Nielson. The Cinco Ranch superstar put a ferocious kick on in the last 150m to hold off an outstanding field of milers.

Nielson, who has been on quite the streak herself all season long, was able to be in the exact position one could hope for. She pulled on the side of the leaders and when she took the lead, she never looked back. Nielson, just a freshman ran to a 4:53.43 win and a new PR. Edging out Vaughan by .06 of a second proved that Nielson can run just about any kind of race. Nielson said, "It just gives me hope to be able to do even better for my future high school career here."

Nielson has run "take it out from the gun" type of races and has recently showed that she can and will run strategic races and make the required moves to take the win. Although being able to run any kind of race is a weapon, she still gets a little apprehensive, "I was very nervous, I just have to remind myself of all the workouts I've done and give myself a pep talk before the race."

Also in the race, was Denton Guyer freshman Brynn Brown. Brown who is no stranger to big time races has also shown the ability to run well in fast and big time meets.

At the Texas Distance Festival she ran a PR 4:58.73 to a fourth place in one of the more competitive races in the state. She confirmed her ability in what is now the best 1600m race in the state today as she lowered her PR to 4:55.79. 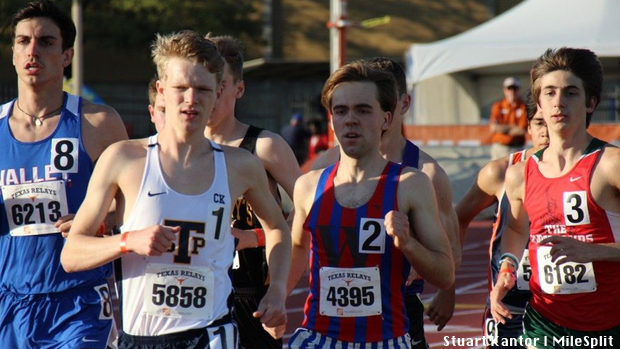 On the boy's side, it was an even more convoluted race.

With many of the state's big-time runners and some outstanding out of state guys, the expected fast race was produced.

Turkey Valley senior Jake Merrell who was running in just his second race of the year charged out the lead and pressed the pace heading into the last lap. Merrell made sure the time would be fast using his state-leading 800m speed to press and develop a lead. "Just got out of basketball, this is my second outdoor meet, overall I'm happy with it, so doing pretty good."

However, just like the girls race, the kicks decided the win.

A barrage of guys came into the last 100m with catching Merrell on their mind. The group charged as Merrell put on a fight to hold off the gang trying to catch him.

When all was said and done, the hometown guy Dereck Elkins from Round Rock Stony Point was the winner in an outstanding time thanks to his outstanding kick and to Merrell's pace push. Elkins PRed with a 4:11.30, "It's pretty huge to come out here and get a good PR. I think I went into it thinking I could do it, but coming out and actually doing it is surreal."

Finishing just behind Elkins in second was Coloradoan sophomore Cruz Culpepper of Niwot HS in 4:11.54, "It was a solid race, I could have gone out a little bit harder, I felt really comfortable. It means a lot, it's my first big track meet in high school."

The finish of this race was so outstanding, that three more runners would finish within less than a second after Elkins crossed the line.

Austin St. Stephens junior Crayton Carrozza had been on an outstanding streak of his own was destined for a breakout in the 1600m. He has been running some outstanding 800m races and then dropped a 9:19 3200m last week winning by over 20 seconds. Carrozza was a part of that fast finishing gang of runners that motored home. He finished in third with at 4:11.79 as Merrell finished with a 4:11.81.