Are the girls 800 meter runners in Texas getting faster?

The answer is a statistical and observational "Yes!"

Times from 2018, 2019, and now 2021 were and continue towards record shattering type races requiring most athletes to hit significant PR's just to avoid the knockout rounds of the championship season.

It's true that a couple of years as a comparison doesn't prove a statistical trend dealing with a small sample size and only two yearly data points but we have more to unpack:

There is a true story (paraphrased here) of a project in WWII when allied bombers were studied to determine where gunfire from enemy planes hit them the most.  The initial recommendation was to place extra armor in those places where the planes had the most bullet holes when they returned intact. The statistician Abraham Wald pointed out that survivorship bias meant that the armor should really be placed in the areas where there were no bullet holes because those were the places on the planes where gunfire damaged the planes to the point that they could not return home safely.

This means that part of our analysis of who is actually getting faster should have some focus on those who made it to state; but to really see the jumps, let's look at the runners who were barely left behind.

In 2021 as the four regional meets unfolded in the 800m runs, the text and Instagram messages simply paraphrased "blistering", "inhuman", "unprecedented" and "FAST'' as the times rolled through MileSplit. Qualifying this year again showed a drop when you compare the average first and second place regional qualifies from 2019 to 2021 (2:14.89 vs 2:12.49) with a 2 second drop. If we look at how tight the races were, we can see just what these competitors needed to do to even qualify for state. In 2019, the group was roughly split with six 1-2 place qualifying regional girls running below the average of 2:14.89 and 10 running slightly slower. In 2021 the placing around the average of 2:12.49 was reversed with 10 girls below the average (6 above), a staggering 8 runners below 2:11 and 3 below 2:10! 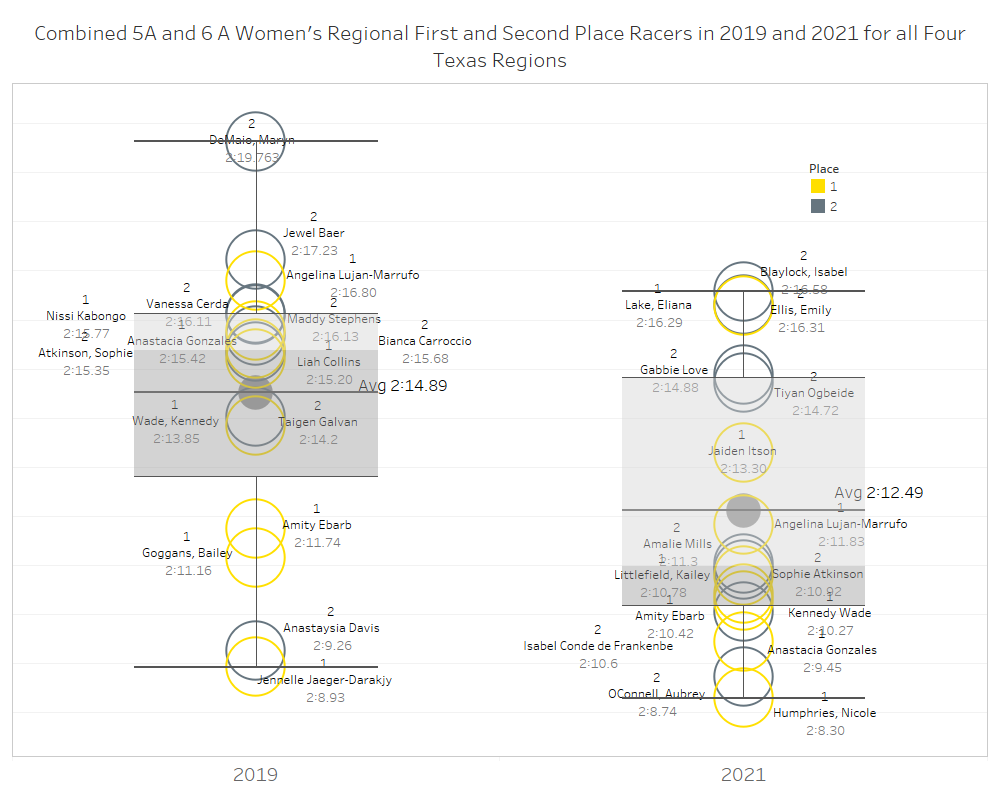 Figure 1:  Box and whisker plot of 2019 and 2021 Women's 5A Regional first and second place 800 m times from all four regions. The average pace was 2 seconds faster but the clustering at the bottom of the graph makes this a hyper competitive, pace-pushing year for the UIL State Championship.

Even more impressive is our survivorship bias example!  In 2019 one girl had a jaw dropping sub 2:11 race (Isabel Van Camp again) with a clear gap between her race and the other 3rd and 4th place competitors across all regions. In 2021, the fastest racers in places 3-4 had four racers with an average time of 2:11.58, however, two of these racers (Brynn Brown, 2:09.99 and Waverly Hassman 2:09.50) shattered the average qualifying time by roughly 3 seconds.

There is absolutely no way to forecast the winner of the 800m race at UIL State this Friday; it simply isn't possible.  We can make a guess as to how much speed will show up on the track. The pace that the racers compete at during the state meet has dropped an average of 3 seconds from the times posted by the top racers at regionals compared to their average times at state each year, while the lead pack at the top has compressed the gap into less than one second for the top 2-3 racers.  With that in mind we can expect to see 5 athletes racing within one second of 2:08 (either way) and two that are at 2:07 or below. There will be no way to win this Friday without a jaw-dropping pace.