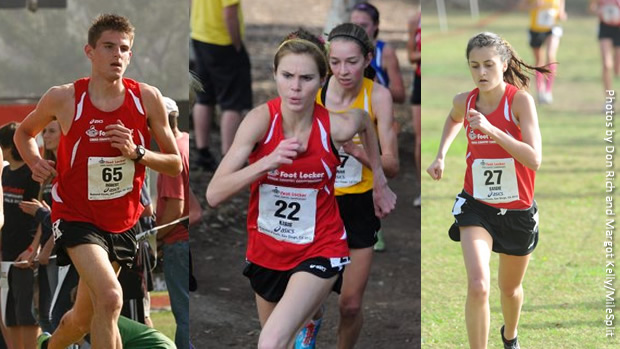 Three Texas runners headed out to San Diego, California for the 2012 Foot Locker Nationals and all came back with All-American honors. Karis Jochen, the senior from A&M Consolidated and the defending cross country state championship in 5A led the way with a fifth place finish in a time of 17:35. She was the number one finisher for the South team that finished second behind the ladies from the midwest. Jochen finished 12th at this event last year and puts an exclamation point on a great senior year and a great cross country career. South teammate Sandie Raines from Kingwood, Texas also had one of her best races of the year. Raines finished seventh at the Foot Locker South Regional to punch her ticket to San Diego and came away with an 11th place showing in a time of 17:52.33. Raines was the runner-up at the 5A cross country state championships to Jochen and finished second behind her at the Nike Regional. She was the third girl to cross the line for the South. Congratulations to both ladies on contnuing a strong tradition of great distance runners  in the Lonestar State!

Last year, it was Daniel Vertiz and Craig Nowak who earned All-American honors at Foot Locker Nationals, but that duo has since moved onto college, making way for a new Texan to shine. In 2011, Robert Domanic finished 20th in San Diego. This year  he wanted to be listed in the same sentences as those guys and make his mark. Domanic ran a great race this weekend to finish 15th and earn that final All-American Spot. Domanic was the number five finisher for the winning South squad. He won the 5A state meet for the second year in a row as well as won the prestigous NIke Regional. Congratulations to Robert on a great year as well!