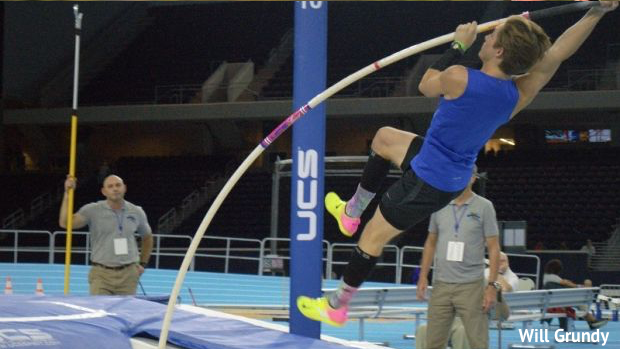 Track is back and it gets underway this weekend at the Dunamis Indoor Opener. Thousands of athletes from all ages ranging from 8 and under up to the college and post collegiate athletes will get an early tasted of competition. Dallas is the selected site and the metroplex is sure to explode with outstanding early performances.

Check out a list of just some of the many outstanding field athletes we have highlighted as must see performers.

Lee's Summit (MO) senior KC Lightfoot will travel down to the DFW to get his first action of this season. Lightfoot is an absolute pole vault stud and his PR height tops out at 17-8.5, yep, he gets up there! Expect sparks to fly when Lightfoot hits the runway as he had three vaults over 17 feet during last year's indoor season including a 17-4.25. He is last year's second place finisher at the 2017 New Balance Nationals Indoor meet.

Be on the look out for the stetson! When you see it, you know you've seen Tyler Lee senior Branson Ellis. Ellis is not only known for his stetson, but also for his pole vault abilities. After taking second at state his sophomore year, he back doored that with his win last year. Not only is he looking to defend his title, he is chasing bars. He has a 16-4.75 PR and is looking to sky higher this season.

Patrick Piperi had quite the sophomore season. At the Region II-6A meet, Piperi tossed the shot put 57-3.75 feet to earn his first trip to the UIL 6A state meet where he would place 7th overall. This weekend, Piperi will get his season started at the Dunamis Indoor Opener. He will try to out throw his indoor best set last indoor season's Dunamis Sports Group Prep Classic 54-7.

Midland senior Sametria Smith is an all around trackster, but if there is one event she is outstanding at it's the long jump. She has been to the state meet several times and she looks to make a trek back to Austin this season. That trek begins this weekend as she starts her senior season at the Dunamis Indoor Opener where she will be one of the top entertainers in the pits.

Mckinney Boyd senior Alyssa Miller and Baylor commit will get her season underway in the field events in the long jump. Miller, a well known high jumper is also another all around trackster as she competes in several events throughout the year. Starting the season in the long jump pit, she'll look to out jump her

Kyla Peeples - Austin Vandegrift
Vandegrift junior Kyla Peeples is a very accomplished high jumper. She qualified for the state meet in each of her previous high school seasons and took second place last season as a sophomore. Peeples will give the high jump spectators their money's worth in the first meet of the season as she makes a campaign for a state title this season.
Tweets by TXMileSplit